After years of resistance against the disputed redevelopment project announced in 2009, Delhi Development Authority evicted the residents of the colony, flattening 400 houses. 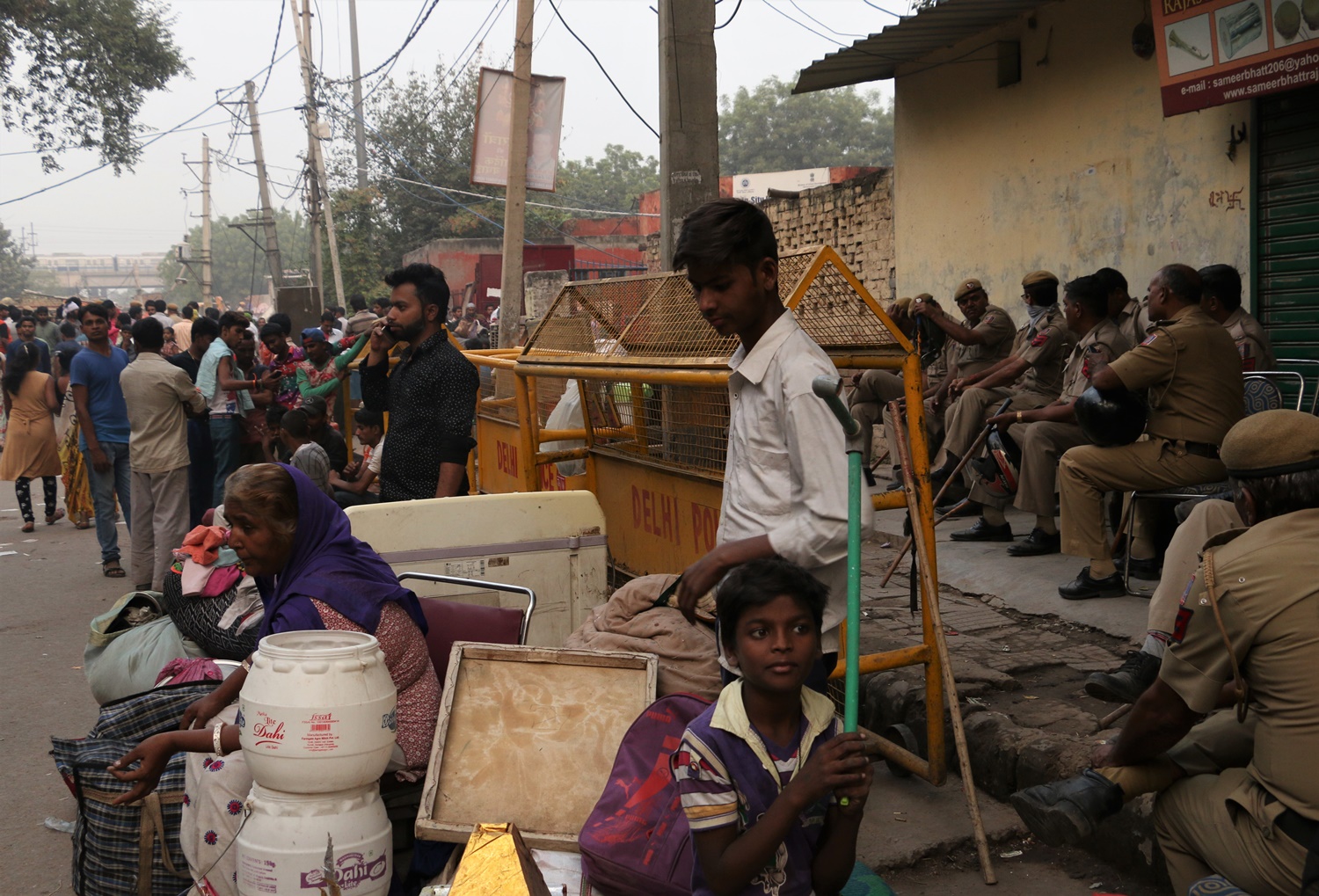 Residents of the colony with their belongings. Credit: Akshita Nagpal

On the evening of October 30, a drone camera circled in the skies above West Delhi’s Kathputli Colony, a jhuggie jhomprie (JJ) cluster of craftspeople and performing artists – puppeteers, acrobats, musicians, and dancers. On any given day, it would capture newly-made puppets drying on terraces, artists rehearsing, craftspeople carving artefacts out of wood, and the buzz of a densely populated neighbourhood. Instead, the proceedings that the drone set-up by the authorities filmed, was a vast patch of rubble created by four backhoe loaders that were still breaking houses in the settlement, the residents of many of these houses standing as audience or scurrying to fetch missed belongings before their home went down, fallen electric poles and sewage water, over 300 men of the Delhi police and one assistant commissioner-rank policewoman, and over two dozen officials from the Delhi Development Authority (DDA), headed by its Principal Commissioner J.P. Aggarwal. 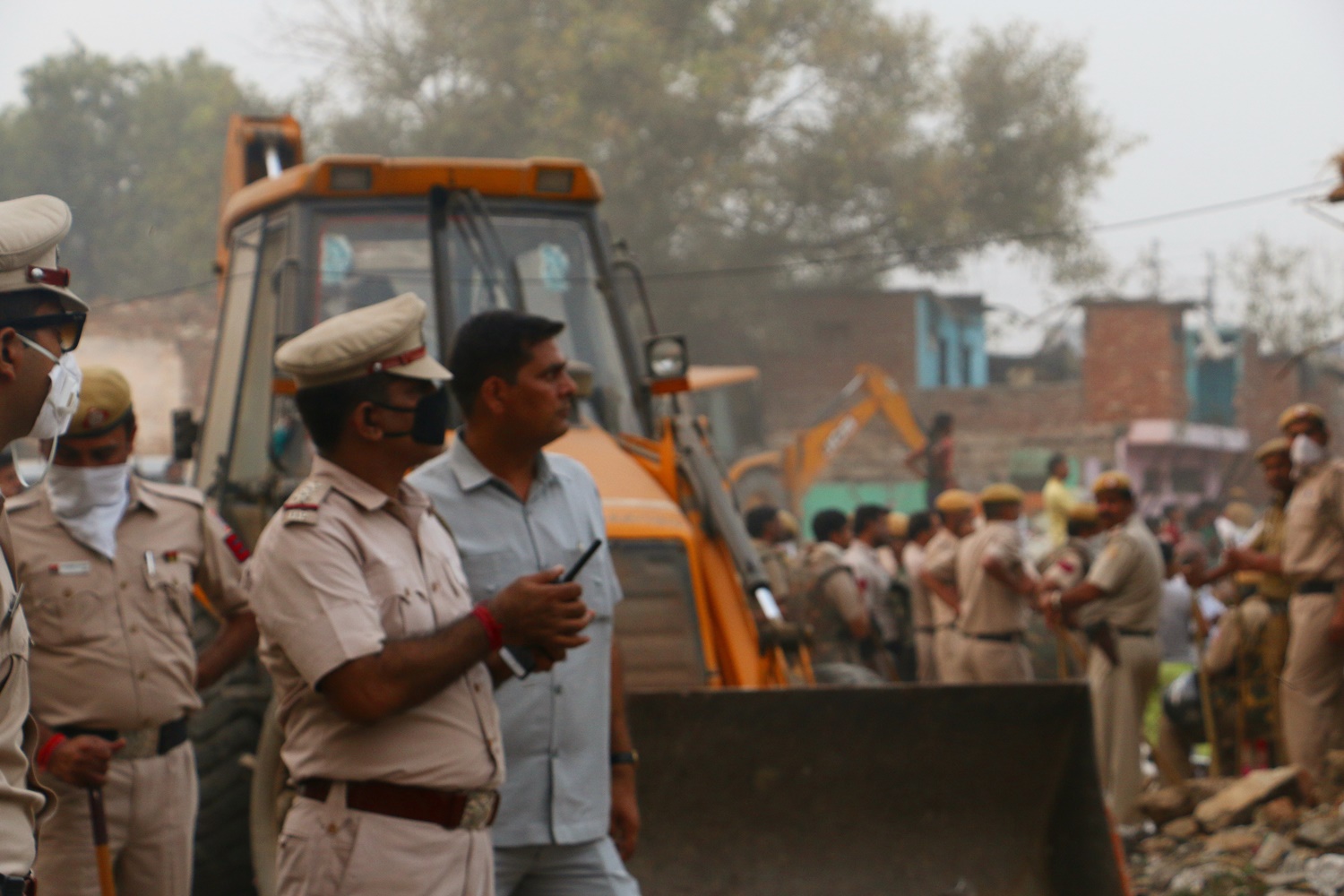 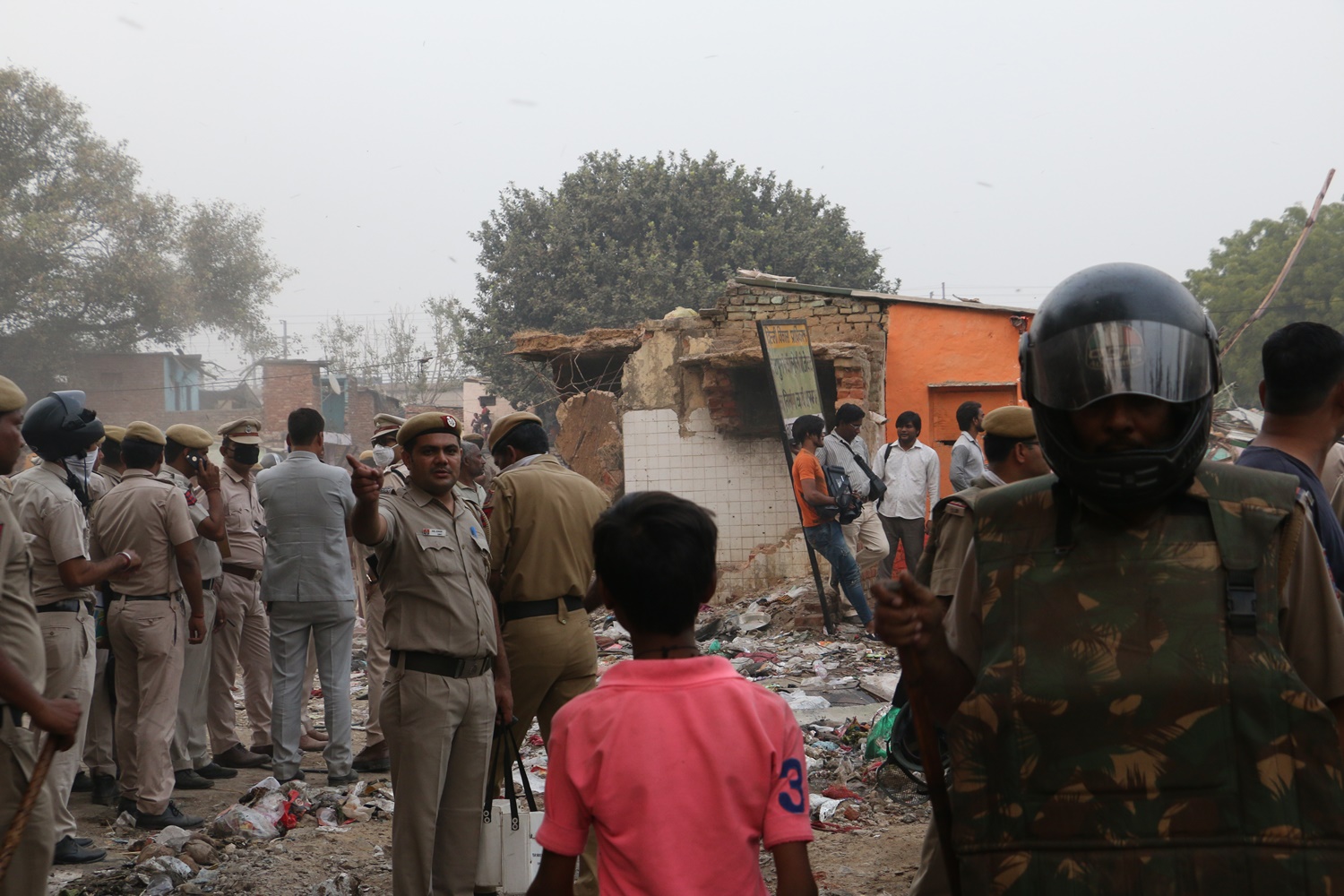 Policemen forbidding the filming of the demolition by media. Credit: Akshita Nagpal

The disputed project, to in-situ redevelop Delhi’s first JJ cluster, that was announced in 2009 – under a public-private partnership between DDA and Raheja Developers Limited – seemed to finally be succeeding in evicting its residents after years of resistance. The families eligible for resettlement will be allotted a flat each in one of the three high-rise towers of EWS flats upon a payment of Rs 1,12,000 (and a lump-sum maintenance expense of Rs 30,000 for a five-year period), within two years of their eviction. 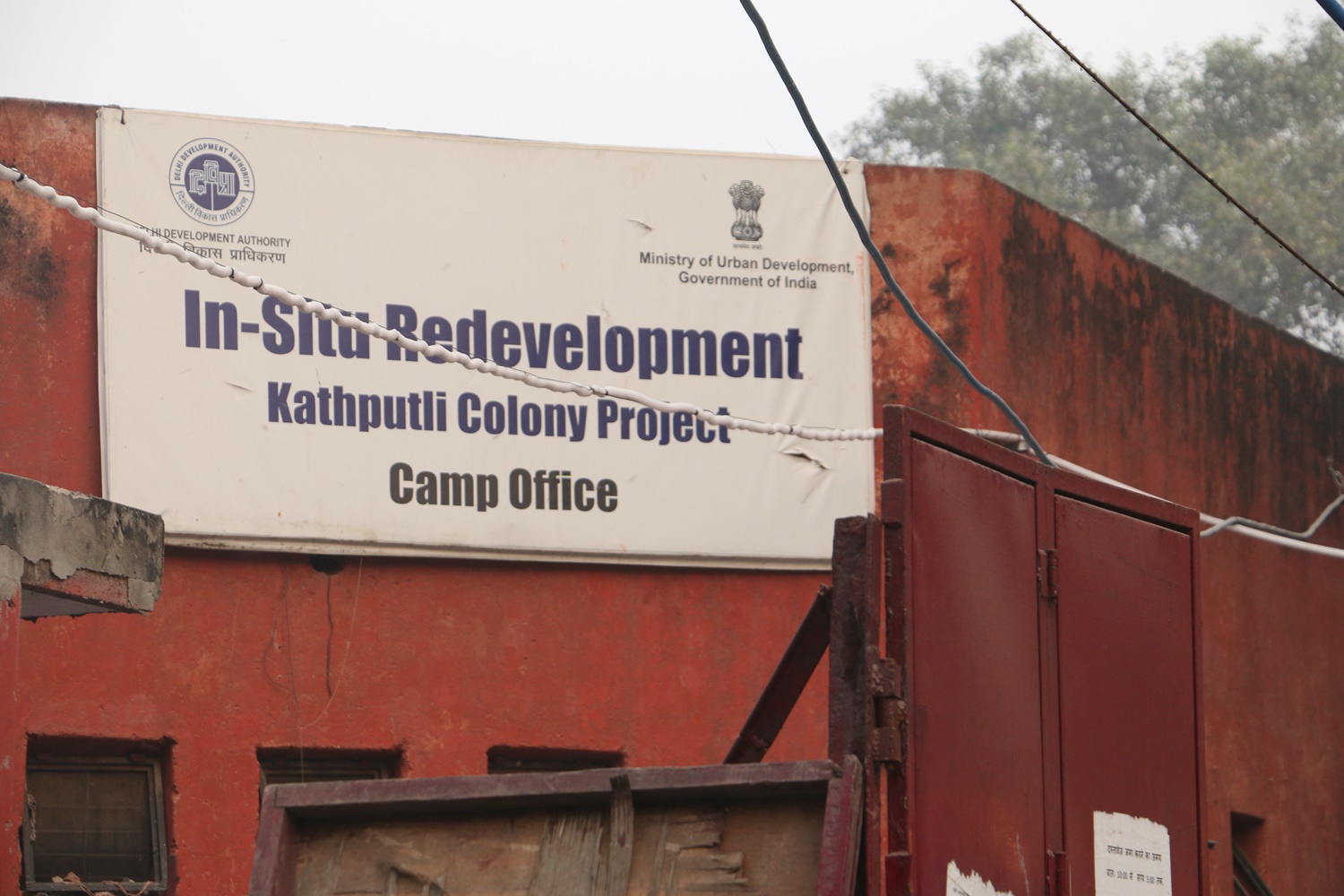 The process, that began at 10 am and lasted till 6 pm, flattened 400 houses, while 1000 more remained. DDA has made provisions for 2,800 temporary houses in a camp in Anand Parbat, and another 492 lodgings in North-West Delhi’s Narela, five and 30 kilometres away, respectively.

“We had issued a notice for eviction three months ago and on October 25, we gave notice for today through printed hand-outs and loudspeaker-announcements.” said Aggarwal.

The most recent notice on the DDA website is dated December 22, 2016. The October-25 hand-out notice accessed from DDA officials warns that “DDA would take necessary action for resettlement in accordance with the law”. 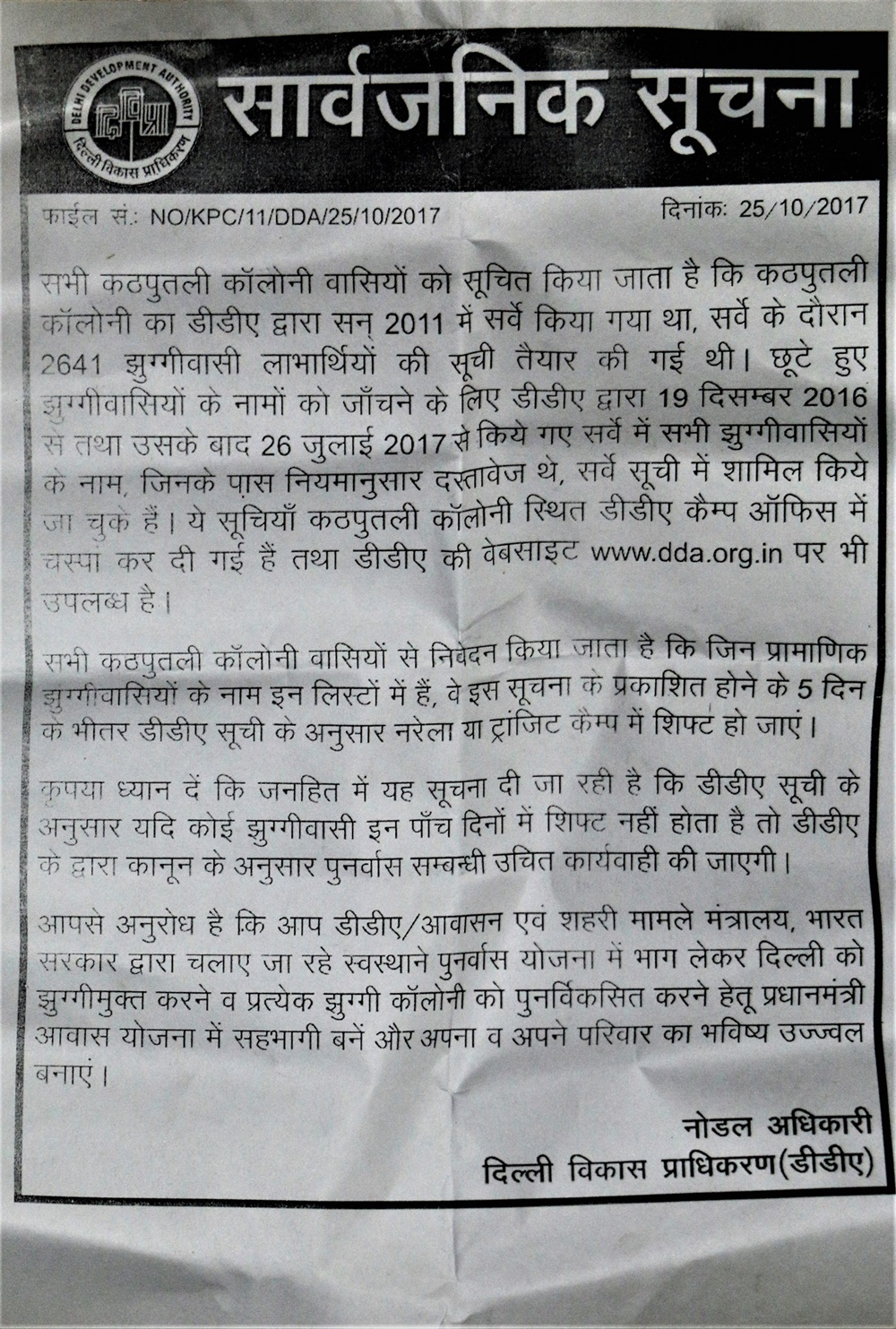 Most residents denied any knowledge of the notice about demolition and alleged they were lathi-charged by police and their locality was tear-gassed. Kamini Bhat, a 40-year-old woman in a bright orange lehenga, who sat on a huge trunk filled with her family’s belongings, said “We had no knowledge of any notice for demolition of our houses.”

Eighteen-year-old Santosh Bhat lifted her salwar to reveal a swollen left foot and ankle. “Policemen manhandled even women, beat us with sticks when we resisted their attempt to tear down our houses.” Several residents alleged that they were manhandled by the police, who lathi-charged them and used tear-gas to force them out of their houses.

Philomina John, 77, General Secretary (Delhi) of National Federation of Indian Women, fractured her left foot due to alleged lathi-charge by the police. Speaking over the phone from Ram Manohar Lohia Hospital in New Delhi on October 31, she said, “As per the 2014 Delhi high court order, the authorities cannot forcefully evict the Kathputli Colony residents and we were there preventing the demolition with residents”. She added that the police force was “primarily male”. Her colleague, Annie Raja, sustained internal injuries in the abdomen and is currently admitted in the same hospital.

Kathputli Colony was also abuzz with unconfirmed reports of the death of a toddler and a woman crushed under demolished houses.

Mandeep Singh Randhawa, DCP (Central Delhi) said, “mild force involving tear gas was used during the demolition process.” He denied reports of any civilian casualties. “Residents pelted stones at the police in which nine personnel were injured,” he said.

The road leading to the entrance of Kathputli Colony was dotted with tin-trunks, television sets, air-coolers, drums, brooms, buckets, washing machines, chairs and the many items that casually fill up homes, lying there like uprooted trees, much like their owners.

Here, seven-year-old Ritu sat waiting for her family in the passenger seat of a DDA-carrier vehicle, to leave for the transit camp in Anand Parbat. Her family was still fishing out their belongings from their house that would soon be demolished. “Mother said I will have to leave school as it will be far from our new house,” said this class II student of a nearby government school.

A teenaged-Kishan Bhat said his family was still inside their home, even though the authorities had snapped off electricity-supply prior to the demolition-drive. “They are giving us a house in Narela against this centrally located colony; we won’t find any work there”. Narela is an industrial area located 30 kilometres from Kathputli Colony. He said the timing of this demolition-drive that coincided with the ‘wedding season’, an important time for his family of dhol-players or drummers. “We sustain the entire year on earnings from three months but we are losing this precious time.” 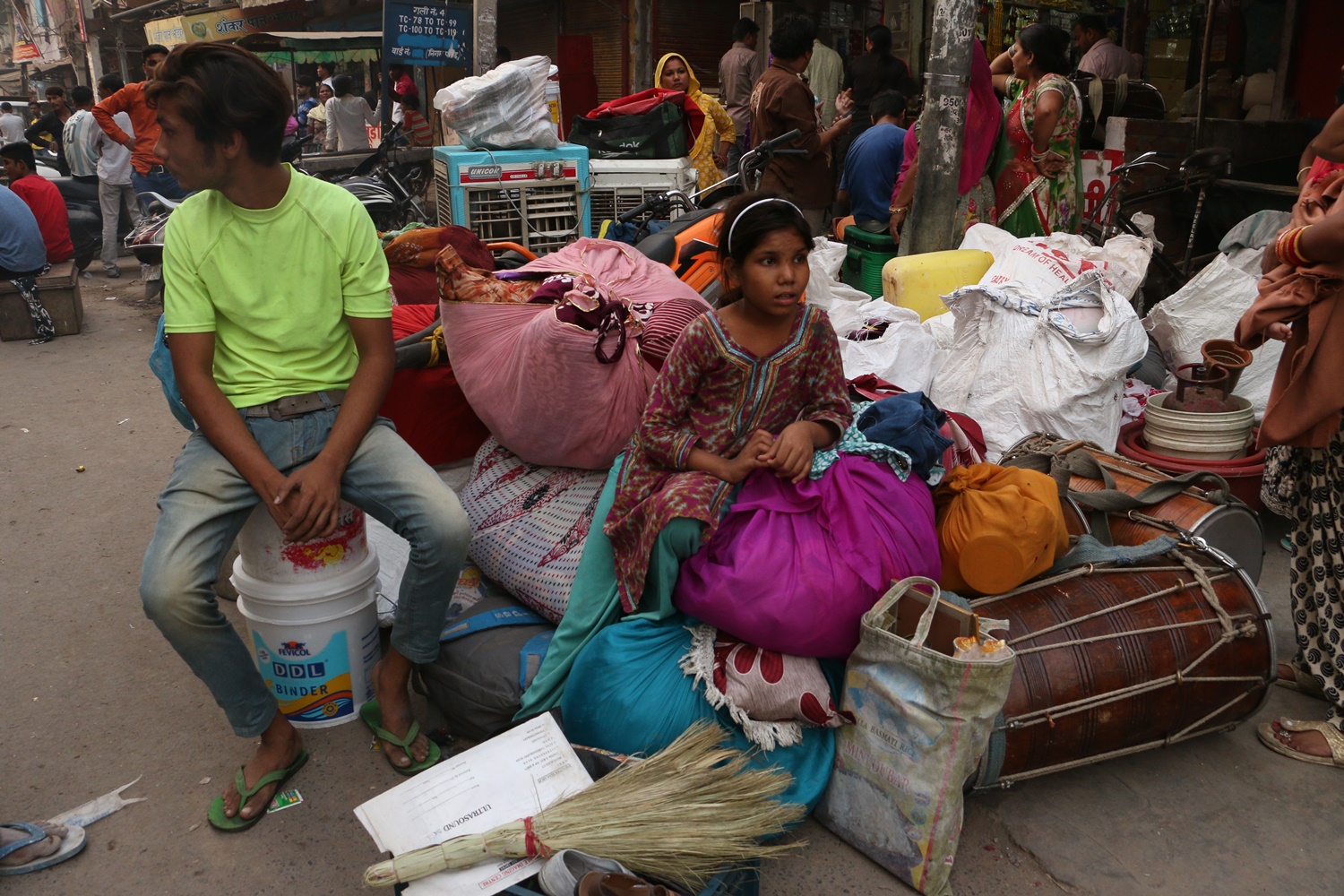 The road leading up to the entrance of Kathputli Colony. Credit: Akshita Nagpal

DDA officials showed me a sample 30.5-square-metre flat located behind the now-demolished headquarters of the Bhule Bisre Kalakar Co-operative Industrial Society, whose compound used to be a workshop for craftspeople. “All these people will get such flats in the redeveloped Kathputli Colony,” said Aggarwal. In the meantime (the two years while these EWS flats are built in Kathputli Colony), he said, “everyone has been given alternative houses in Anand Parbat and Narela.” 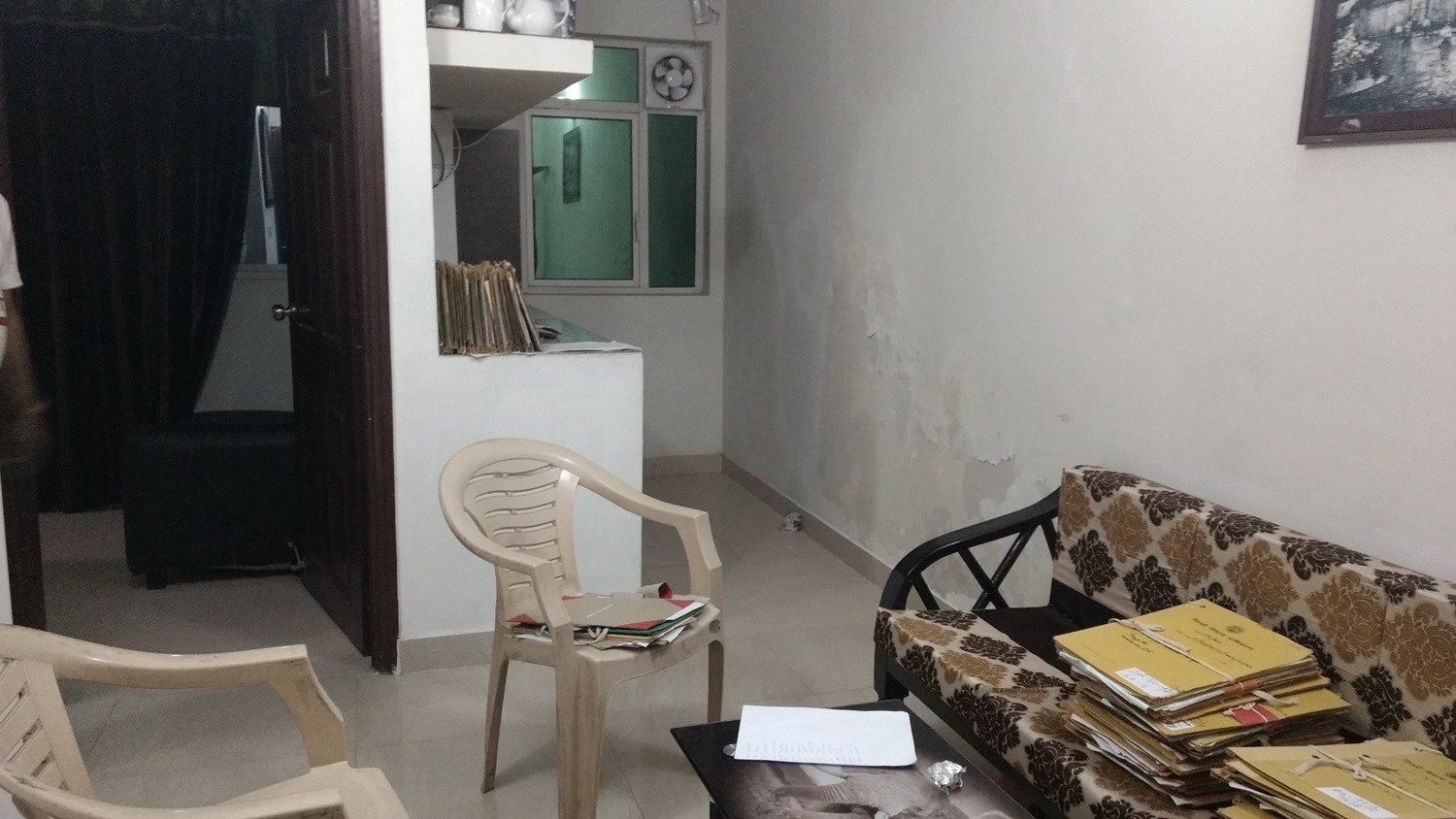 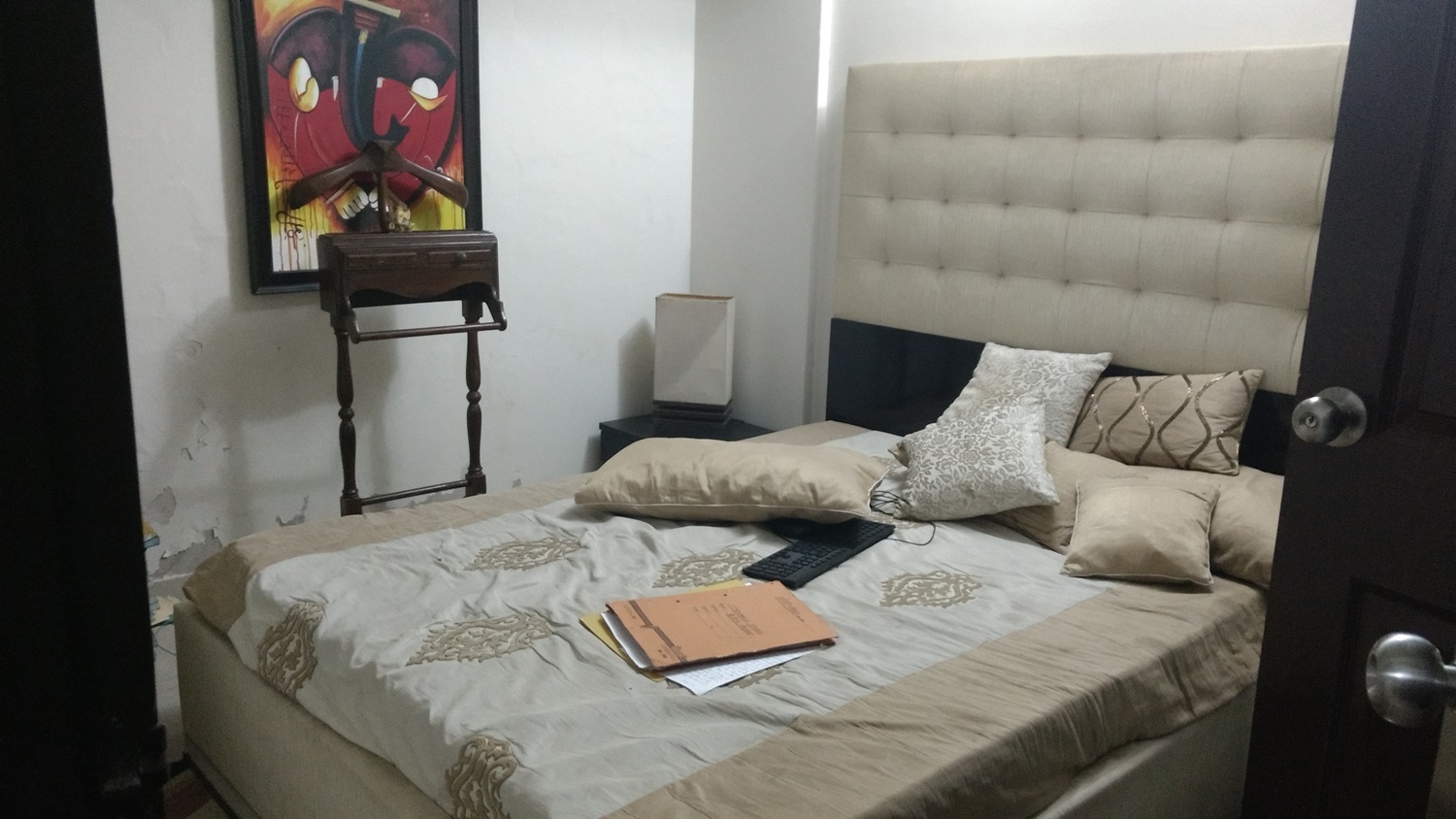 Twenty-five-year-old Toni Bhat is perhaps one of these people. He and his wife Meenu Bhat stood watching over their belongings, holding their sleeping one-year-old twins. “I saw 50 years of my family’s history here razed to the ground by bulldozers and now we have nowhere to go,” said Bhat, who earns his living as a musician. Despite his situation, he broke into a smile for a picture. 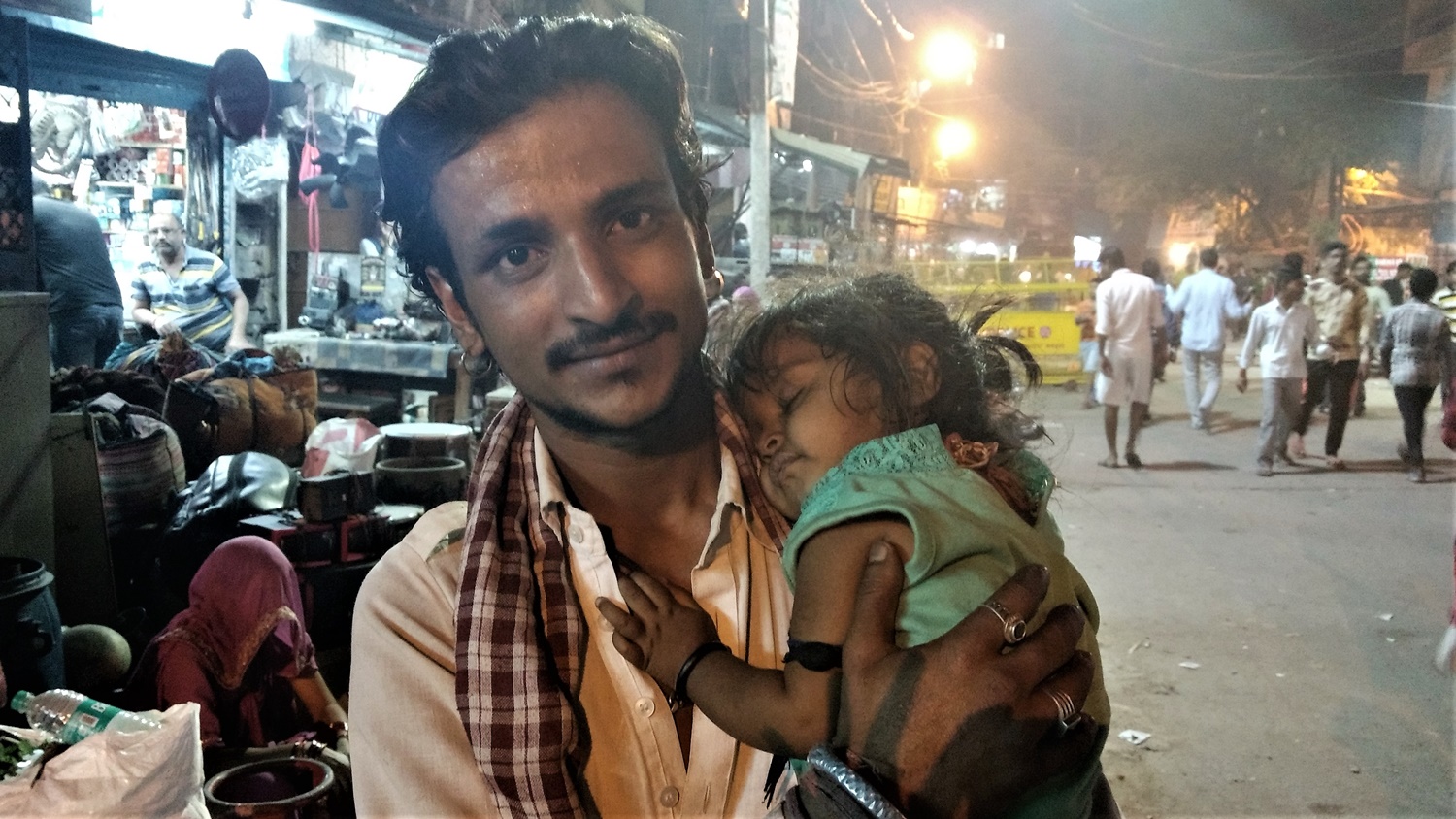 Teenaged sisters Aashu and Soni Bhat, who sat counting the tin-trucks with their belongings, imagined how their TV and LCD-player must have gotten smashed inside their now-demolished house. They did not have enough time to save all their belongings as the tear-gas induced panic and blurry vision. Soni is sceptical about their new house in Anand Parbat. “The houses there are made of kaagaz (paper) and can easily collapse,” she said, referring to the lightweight-aerocon panels that the transit-camp houses are built of. “If we are alive, we will earn enough again.” Aashu assured her with optimism. A worried Soni countered her, saying, “Raheja will remove us from Anand Parbat after two years and we will be homeless again.”

Akshita Nagpal is a New Delhi-based multimedia journalist who has written for The Caravan, The Hindu, Deccan Herald and Kafila amongst other publications and has shot non-fiction films for digital portals.