Why Is Pakistan So Paranoid About India's Role in Afghanistan?

Pakistan’s hegemonic design in Afghanistan is clear, but what is subtle is that it seeks to leverage its use of jihadist proxies to convince the US to help resolve the Kashmir dispute with India. 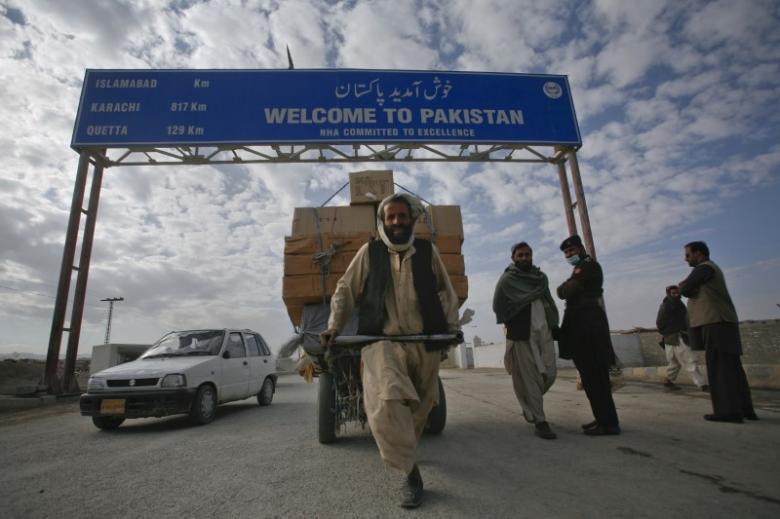 A man passes a road sign while pulling supplies towards the Pakistan-Afghanistan border crossing in Chaman November 28, 2011. Credit: Reuters/Naseer Ahmed

US President Donald Trump’s new Afghanistan policy has Pakistan in a tizzy even after two months, with the latter’s response ranging from recounting its contributions to the US-led war on terror to its parliament threatening to block the ground lines of communication running through its territory to choke the supply to the International Security Assistance Force troops in Afghanistan. Trump has practically put Pakistan on notice that should it continue to harbour and nurture the Afghan Taliban, particularly its most lethal wing, the Haqqani terrorist network (HQN), there will be serious consequences. One element in the US president’s speech that really rattled Pakistan was his call to India to increase its supportive role in Afghanistan.

Pakistani political leaders, the army chief and commentators alike have come out swinging against Trump’s suggestion, claiming that any Indian involvement in Afghanistan is inimical to Islamabad’s interests. At his recent talk at the Council for Foreign Relations, Pakistani Prime Minister Shahid Khaqan Abbasi went to the extent to say that Pakistan wants ‘zero’ political or military role for India in Afghanistan. For a country that was carved out of India and Afghanistan, it is quite rich to tell Kabul and Delhi to fashion their mutual ties according to Islamabad’s whims.

None of this rhetoric against Indian cooperation with Afghanistan is new. Former Afghan President Hamid Karzai is on the record stating that Pakistani leadership had asked him to curtail Indian presence in his country. Similarly, a ‘non-paper‘ presented by former Pakistani army chief General Ashfaq Parvez Kayani to then US President Barack Obama is reported to have made similar demands of the US. Additionally, the Pakistani leadership has not only consistently owned the presence of the Taliban leadership inside Pakistan but also bragged about using them as a counter to India in Afghanistan. The death of the Taliban emir Mullah Mohammed Omar, the assassination, by a US drone strike, of his successor Mullah Akhtar Mansoor and the appointment of his replacement Mawlawi Haibatullah Akhunzada, all inside Pakistan, as well as the killing of the HQN’s financial lynchpin Nasiruddin Haqqani near Islamabad, show that Pakistan is not bluffing. The Taliban cadres may be in Afghanistan but its brains remain on Pakistani soil.

Pakistan thus unabashedly justifies the use of terrorist proxies on the pretext of pursuing its “legitimate” security concerns in Afghanistan. The Pakistani foreign minister Khawaja Muhammad Asif repeated the legitimate security concerns mantra during his recent US visit, with utter disregard to the fact that the use of terror proxies even for legitimate security concerns is not just illegitimate but heinous in the extreme. That Pakistan would wish to see no Indian military involvement in Afghanistan is perhaps understandable, but its wish to dictate with whom the Afghans should have diplomatic and development relationship is purely hegemonic and detached from reality. India has granted aid worth $2 billion and provides civil and military training to Afghanistan, while Indian companies are involved in several reconstruction projects. India has remained Afghanistan’s biggest regional donor, providing about $3 billion in assistance since 2002. It has constructed the new Afghan parliament, built major hydroelectric projects like the Salma Dam, developed over 2,500 miles of roads and provided thousands of educational scholarships. Despite all the help with rebuilding the infrastructure in Afghanistan, India, in fact, has no military presence there. The outdated Pakistani military concern that India seeks to cultivate a relationship with Afghanistan so that it can militarily trap Pakistan in the so-called nutcracker or pincer manoeuvre is belied by the three countries’ history. Pakistan has fought four wars with India and not on one occasion did Kabul assume a hostile military posture vis-à-vis Islamabad.

While Pakistan harps about “dozens” of Indian diplomatic missions, they are numerically no more than that of Pakistan – one embassy and four consulates each. In fact, the Indian diplomatic footprint in Afghanistan today is not different than what it was in the 1970s. The Pakistani leadership has alleged that the Indo-Afghan nexus stokes the secular ethno-national Baloch and Pashtun separatist movements in Pakistan. This mistrust dates back to Afghanistan voting against Pakistan’s UN membership after it gained independence from the British. While that vote was withdrawn, the rancour over Pashtun areas east of the Durand Line remained. Afghanistan disputes the Durand Line as an arbitrary demarcation, coercively imposed on it by the British, which has vivisected the Pashtun/Afghan population into two. As the British were partitioning India, Pashtun leader Khan Abdul Ghaffar Khan’s partisans had called for an independent Pashtunistan; however, he later joined Pakistan’s constituent assembly.

Pakistan, for its part, considers the Durand Line as an international border. Afghanistan, especially under its first president, Sardar Mohammad Daud Khan, supported the creation of Pashtunistan – a free Pashtun country – comprising the Pashtun areas under Pakistani control. As Louis Dupree has noted, Afghan irregulars and troops also raided the Pashtun regions of Bajaur and Dir in the early 1960s to foment a Pashtun separatist movement. Daud and later the Afghan communists did lend tacit support and sanctuary to the secular Pashtun politicians and some aspiring separatists. However, with the waning of the communist power, Kabul’s Pashtunistan project wilted on the vine. On the other hand, no major Pashtun nationalist political party in Pakistan has ever demanded a separate Pashtun country, let alone run an insurgent separatist movement. The two main ethno-nationalist political groupings, the Awami National Party and the Pashtunkhwa Milli Awami Party, have regularly been part of the Pakistani parliamentary system since 1988. Both have remained coalition partners in the federal and provincial governments in Pakistan. There has absolutely, positively been no Pashtun separatist movement in Pakistan since 1988 and no formal one even before that.

Also read: US Changes Rules of War in Afghanistan, Will Strike Taliban Harder

It would thus seem that the Pakistani military and its propagandists have been tilting at windmills. But this paranoia is feigned; it is actually a ruse for justifying Pakistan’s jihadist project, which is as old as the country itself. In its 1947-48 war against India in Kashmir, Pakistan deployed tribal Pashtun irregulars, recruited in the name of jihad, alongside its regular troops. No less than the country’s first Prime Minister Liaquat Ali Khan signed off on the project. The use of jihadist proxies became a formal tool of prosecuting the foreign policy under another prime minister, Zulfikar Ali Bhutto, who formed an Afghan cell in the foreign ministry in 1973 and also authorised military’s Frontier Corps under Brigadier (later major general) Nasirullah Babur to recruit Afghan Islamists like Burhanuddin Rabbani, Gulbuddin Hekmatyar and Jalaluddin Haqqani to counter Daud’s support to the secular Pashtun and Baloch politicians and separatists.

Jalaluddin Haqqani, the founder of the HQN, set up his training centre in Pakistan’s North Waziristan tribal region in 1973 and launched his first jihad against Daud Khan in 1973. The Bhutto-commissioned Afghan jihadists launched a second jihad against Kabul in 1975. Pakistani finance minister Khawaja Asif recently claimed in the US that Haqqanis were the darlings of the US and insinuated that Pakistan did it at the American behest. But the fact is that Pakistan sired those jihadists to counter the secular Pashtun leftists and nationalists and did so when neither Soviet troops nor the ISAF forces were in Afghanistan, which is produced as an excuse for jihad today. While the West and Gulf Arabs had helped Pakistan’s jihadist project grow against the Soviet Union in Afghanistan, Pakistan never rolled it back even when this help and largesse stopped. 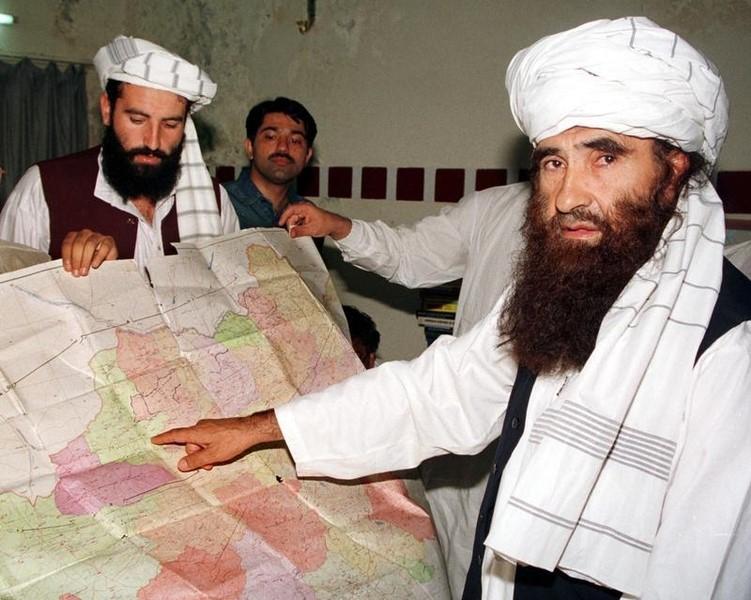 Jalaluddin Haqqani (R), the Taliban’s minister for tribal affairs, points to a map of Afghanistan during a visit to Islamabad, Pakistan while his son Naziruddin (L) looks on in this October 19, 2001 file photograph. Credit: Reuters/Stringer/Files

The current Baloch separatist movement in Pakistan has no real support from the present-day Afghan government. There are no Baloch training camps inside Afghanistan and no supply of arms has ever been shown to have come from the Afghan government. The Indian support to the Baloch separatists, if any, has followed other channels and some of the Baloch leaders make no secret of it. The fact, however, remains that three Baloch insurgencies preceded even the formation of the Indian intelligence agency Research and Analysis Wing. Afghanistan just makes a convenient piñata for Pakistan to whack for its own domestic failures and highhandedness, which have alienated a generation after generation of the Baloch.

Pakistan’s hegemonic design in Afghanistan is clear, but what is subtle is that it seeks to leverage its use of jihadist proxies to convince the US to help resolve the Kashmir dispute with India. Seeking US assistance in jump-starting the dialogue over Kashmir has been on Pakistan’s wish list forever. However, it is most convoluted to think that by use of jihadist proxies under the pretext of legitimate security concerns vis-à-vis India, the US can somehow be coerced and cajoled into becoming what some Pakistani leaders call an honest broker. The problem with this fanciful proposition is manifold. Firstly, Pakistan seeks to undo the territorial status quo in the Kashmir region but secondly, and more importantly, its India paranoia is more ideological than geopolitical. Even if somehow the so-called genuine security concerns can be assuaged, Pakistan’s ideological quest to seek parity with a country four times its size, with an economy even larger than that, is simply unrealistic. No amount of brokering, appeasement or mitigation can fix what is a figment of ideological imagination or a blatant desire for expansion. It is, therefore, imperative for the Trump administration to not get sucked into the Kashmir morass in an attempt to resolve the Afghanistan crisis. There are, after all, no guarantees that even if the Kashmir issue is somehow resolved miraculously it would change Pakistan’s ideological calculus seeking parity. Real security fears can be mitigated but paranoia, and a feigned one at that, has no diplomatic remedy.

The US administration must stick to the template outlined by Trump in his August 21 speech. The Afghan troops fight and defeat the Taliban every single day inside Afghanistan, but they are not in a position to neutralise the Taliban and HQN leadership tucked away safely in Pakistani cities. In the 2016 Quadrilateral Talks on the Afghan Peace Roadmap, Pakistan had agreed to act against the Afghan jihadists on its soil should the fail to come to negotiations. For starters, the US could lean on Pakistan to hold its end of the bargain. It is a well-known Pakistani and Taliban tactic to show new willingness for talks as the summer fighting season ends to bide time through the winter, when fighting slows down, only to announce new offensives each spring. The US would do well to not fall for this ploy again. Pakistani army chief General Qamar Javed Bajwa’s recent dash to Kabul is an all-too-familiar tactic used to deflect US pressure and fits the pattern of the fight-in-summer, talk-in-winter routine. The Trump administration must set measurable metrics and deadlines for Pakistan to deliver its end of the bargain. And should no verifiable progress be apparent, the array of robust diplomatic, economic and military tools at the US disposal should be deployed without delay. Between the George W. Bush and Obama administrations, the US had forked out $35 billion to Pakistan, a major chunk of which went to its army. The gravy train must stop. The time for incentives and appeasement has long passed.

Mohammad Taqi is a Pakistani-American columnist. He tweets @mazdak