Adani Group 'SLAPP' Pushes EPW Editor Out of His Job

Worried about the threat of an expensive lawsuit by one of India's biggest corporate houses, the trustees running the journal ordered the removal of articles critical of Adani Power Ltd. 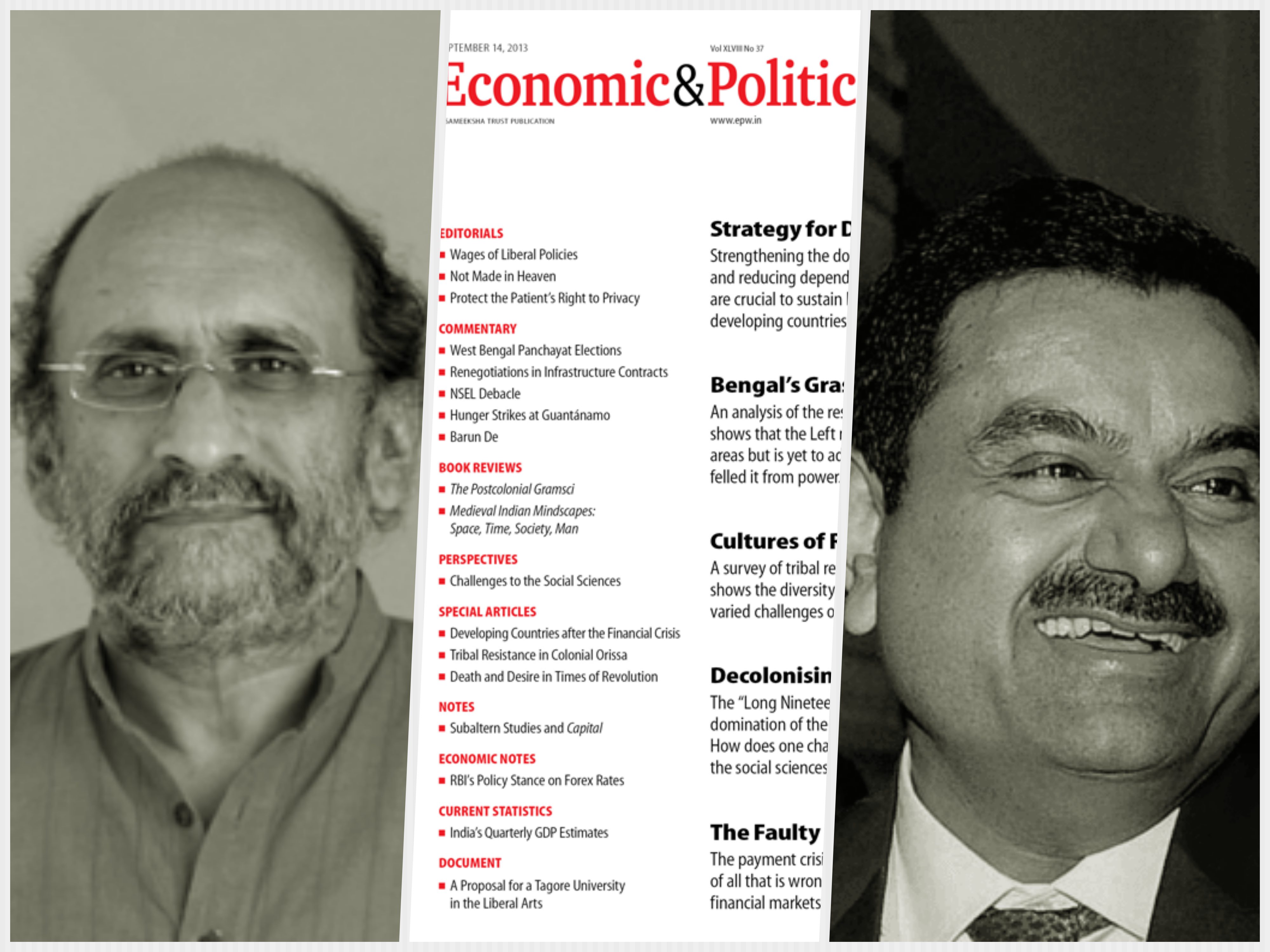 Paranjoy Guha Thakurta, who resigned as editor of the Economic & Political Weekly (left), and Gautam Adani, promoter of the Adani group, whose legal notice precipitated Thakurta's exit from the celebrated journal.

New Delhi: Economic & Political Weekly (EPW) editor Paranjoy Guha Thakurta became the first top-level editorial casualty of corporate India’s increasing tendency to file multi-crore defamation cases as a means of countering critical reporting, resigning after the directors of the trust which runs the storied journal ordered him to take down an article on the Adani group.

Last month, Adani Power Ltd. sent a letter via its lawyers to EPW, the article’s four authors (which included Thakurta) and Sameeksha Trust, which owns and runs the journal. The lawyer’s letter demanded that immediate steps be taken to “remove/delete and unconditionally retract” an article  ‘Modi Government’s Rs 500-Crore Bonanza to the Adani Group’ (June 24, 2017) that they said was defamatory and harmful to the reputation of their client. The letter also objected to the publication of an earlier article,‘Did the Adani Group Evade Rs 1,000 Crore in Taxes?’ (January 14, 2017), but did not specifically ask for it to be removed.

The letter said that unless this was done, “our clients shall be constrained to take such action as they may be advised”.

On Tuesday, the Sameeksha Trust board, which met in Delhi, ordered the editorial department to take the article down (alongside which Thakurta had also posted a copy of the Adani letter and a legal response by EPW).

Thakurta resigned soon after the meeting. He told The Wire that he was looking forward to spending more time with his family in Delhi. EPW’s editorial offices are in Mumbai.

Sameeksha Trust chair Deepak Nayyar was not available for comment, nor were other board members that The Wire reached out to: historian Romila Thapar, political scientist Rajeev Bhargava and sociologist Dipankar Gupta. It is understood that the trust will issue a statement on the latest developments on July 20.

Both articles were republished by The Wire at the time of their original publication in EPW and will continue to be available:

Adani’s lawyers have also written to The Wire demanding the second article be taken down.

Founded in 1949 as the Economic Weekly, EPW took on its current name in 1966 and is one of India’s most respected publications, straddling scholarship and political commentary. Thakurta, a highly regarded business journalist and political commentator, took over the editorship in January 2016 from C. Rammanohar Reddy, who ran the journal for over a decade.

The Adani letter is an example of what media analysts and lawyers call ‘strategic lawsuits against public participation’ – or SLAPPs.

In a 2015 editorial calling for the United States to emulate California and enact a federal law protecting free speech against encroachment by powerful interests, the Los Angeles Times pithily described what SLAPPs are all about: “A deep-pocketed corporation, developer or government official files a lawsuit whose real purpose is to silence a critic, punish a whistleblower or win a commercial dispute.”

What is notable about the Sameeksha Trust’s decision to pull the plug on the two articles is that Adani had only sent them a lawyer’s letter and not filed an actual case despite the expiry of the 48-hour deadline mentioned in the letter.

Such legal letters threatening expensive and time-consuming litigation are increasingly being used by large corporations to intimidate editors, proprietors, journalists and writers and prevent them from shining a light on allegations of wrongdoing.

In India, companies with deep pockets can not only resort to filing for civil defamation and seeking crores of rupees in damages, they are also free to invoke the law of criminal defamation, under which an accused person can be imprisoned. Last year, a petition to strike down criminal defamation as unconstitutional was rejected by the Supreme Court, making India one of the only democracies in the world to still retain the draconian law on its statute books.

The National Democratic Alliance politician and MP Rajeev Chandrashekhar filed two defamation suits worth Rs 10 crore each against The Wire in March 2017 for having published articles that focused on his new media venture, Republic TV, and the potential conflict of interest involved in his serving on the parliament’s standing committee for defence while owning companies that are involved in the military sphere. Unusually, Chandrashekhar managed to secure an ex parte injunction from a local court in Bengaluru for the two articles to be taken down, without The Wire even being heard.

Chandrashekhar’s suits are currently being challenged by the Foundation for Independent Journalism, the not-for-profit company that publishes The Wire.

The Wire‘s editors have also been summoned by the chief judicial magistrate in Aizawl, Mizoram, following the registration of a criminal defamation case by E-Cool Gaming Solutions – a company linked to ZEE TV owner Subhash Chandra – for an article published in The Wire based on a CAG report critical of the functioning of one of his group companies involved in the lottery business in the northeastern state.

Note 1: The story has been updated to note that The Wire has received a letter from Adani’s lawyers demanding that the article by Paranjoy Guha Thakurta et al. be taken down from its website.

Note 2: Though the legal letter from the Adanis attacked two articles written by Paranjoy Guha Thakurta et al, it asked for only the second, ‘Modi Government’s Rs 500-Crore Bonanza to the Adani Group’, to be taken down. In an earlier version of this article, it was incorrectly stated that both articles have been taken down. It is, in fact, only the one the Adanis demanded that was removed from the EPW site.