A Similar Anomaly Has Showed up in Three Physics Experiments Since 2009. What’s Happening?

A small but persistent discrepancy between the rates at which particles called B mesons decay into different pairs of leptons has physicists intrigued. 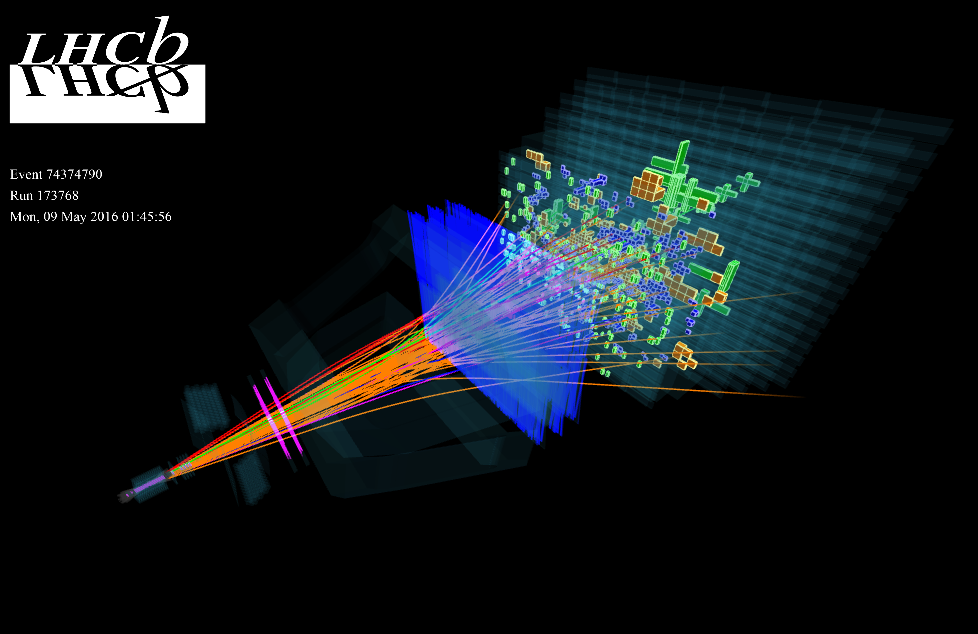 A typical LHCb event fully reconstructed during data taking on May 9, 2016. Caption and credit: CERN

The Large Hadron Collider accelerates billions of protons to very nearly the speed of light and then smashes them together head-on. These high-energy collisions happen at four specific points around the LHC’s ring – each straddled by one detector. One of these detectors is the LHCb. The ‘b’ in its name stands for ‘b-physics’, a branch of particle physics that studies larger particles that contain a smaller particle called the bottom quark.

In new results discussed at a seminar at CERN last week, physicists noted a discrepancy between the behaviour of one of the larger ‘b’ particles as observed by the LHCb and the theoretical prediction. They don’t exactly know why the difference exists but they have some ideas. The bigger question is if it could be a sign of the ‘new physics’ that physicists have been looking for.

They’ve also conceded that the results extracted from the LHCb data aren’t statistically significant enough. In other words, because the events being studied happen quite rarely, the data sample has to be big enough to comfortably eliminate the possibility of statistical fluctuations. This can be eliminated to a greater extent by collecting even more data. So why pay attention to it now?

There is a good reason: the discrepancy has been observed before in three different experiments across eight years.

“Although only mildly significant on their own, together the anomalies in the B-decays seem to be telling us that this is more than a statistical effect and that there is something in them that we do not understand,” Siim Tolk, a particle physicist at Cambridge University, UK, told The Wire.

The larger ‘b’ particle in question is a B meson. It contains one antimatter version of the bottom quark and one matter version of some other quark (there are five other types to pick from). When protons collide in the billions under the watchful gaze of the LHCb, the ‘up’ and ‘down’ quarks that they’re made of come loose and interact with other quarks produced in the collisions. In this chaotic splatter, a B meson is formed. And a millionth of a millionth of a second later, it has about a one-in-a-million chance of decaying into particles called kaons.

Physicists have their eye on this decay process. It is mediated by a phenomenon called flavour-changing neutral currents (FCNC).

The Standard Model, a clutch of theories and rules that physicists currently use to understand how particles behave, has room for FCNCs. While some kinds of FCNCs have been found, there are rarer others that continue to evade experimental verification. So efforts to make sense of them have often led scientists to create new theories and rules that haven’t been confirmed yet. This is also where physicists expect to stumble upon ‘new physics’: a realm of physics that goes beyond the Standard Model, explaining things the model can’t.

“We have not seen any direct ‘new physics’ hints from the LHC up until now,” Tolk, who is also a member of the LHCb collaboration, said. “And it is becoming more unlikely that we will find a clear, direct evidence for one particular ‘new physics’ model in the near future.” This is actually why the FCNC route is enticing.

One of the general predictions of many ‘new physics’ models is that there should be particles heavier than the ones we already know in the Standard Model. Finding them would confirm the presence of physical forces that we haven’t been able to detect yet, and which could help make sense of some unsolved problems in physics today. And physicists think that these heavier particles – should they exist – could be influencing how FCNC works. And in turn, the FCNC could be influencing the B mesons’ decay to kaons.

The new results tracked the decay of a type of B meson: the B0 meson. To quote Tolk: “In B meson decays to kaons, the FCNC also produces a lepton and an anti-lepton. For example, a kaon could be accompanied by an electron and anti-electron pair or a muon and anti-muon pair – all lepton anti-lepton combinations of the same flavour are equally possible in the Standard Model.” Flavour is a quantum number accorded to elementary particles.

A rule called lepton-flavour universality dictates that the electron/anti-electron pair and the muon/anti-muon pair should be produced with equal frequency when a B0 meson decays. However, the LHCb data showed that the ratio wasn’t 1. The electron/anti-electron pairs were forming more often. Tolk and his peers suspect that this could be the sign of ‘new physics’ that has been evading them.

“What makes it especially interesting is that this is only one measurement out of many different measurements of decays that all involve similar FCNC transitions and deviate from the Standard Model predictions,” according to Tolk.

In 2009, a discrepancy was found in an experiment checking for the ratio of muon/anti-muon to electron/anti-electron formation in B0 meson decays at the Belle detector, which straddles Japan’s KEKB particle collider. In 2012, the BaBar detector at the Stanford Linear Accelerator Centre reported similar results – followed by the LHCb in 2014. In all cases, the electron/anti-electron pairs were forming more often.

The LHC is set to reawaken after its winter shutdown in May. The data it will collect this year could lay doubts about whatever is happening with the B0 meson decays to rest. Then again, this depends.

There are three kinds of FCNC processes that occur naturally. In the first kind, B mesons decay to kaons and leptons (electrons, muons, tauons and neutrinos). These can be studied by detectors like LHCb, Belle, CMS and ATLAS (the last two are also at the LHC). In the second kind, a B meson decays to pions and leptons. This process is extremely rare and experimentally more challenging. In the third kind, a larger particle such as a kaon decays into a pion and a lepton/anti-lepton pair.

According to Tolk, “If the current LHCb anomalies in the rare B decays are due to new particles, then in many ‘new physics’ scenarios, the effects would also show up in rare FCNC kaon decays.” He added that this will have to be investigated by detectors like LHCb, NA62, KOTO, etc.

Until then, the flavour of the season will be caution. As Amanda Cooper-Sarkar, a physicist at Oxford University, said, “results [like this] come and go all the time”. There was one such just last year, a supposedly heavy particle seen in weak data that prompted physicists to write over 500 papers about what it could be in a few months. But in additional data taken by the LHC, the particle vanished. The lesson was that, no matter how often something showed up in the data, it had to be taken with a pinch of salt until certified reliable. With the LHCb results, that day will hopefully come.