The factors the finance commission takes into account when deciding the state share of central taxes appear to be awfully simplistic, even regressive. 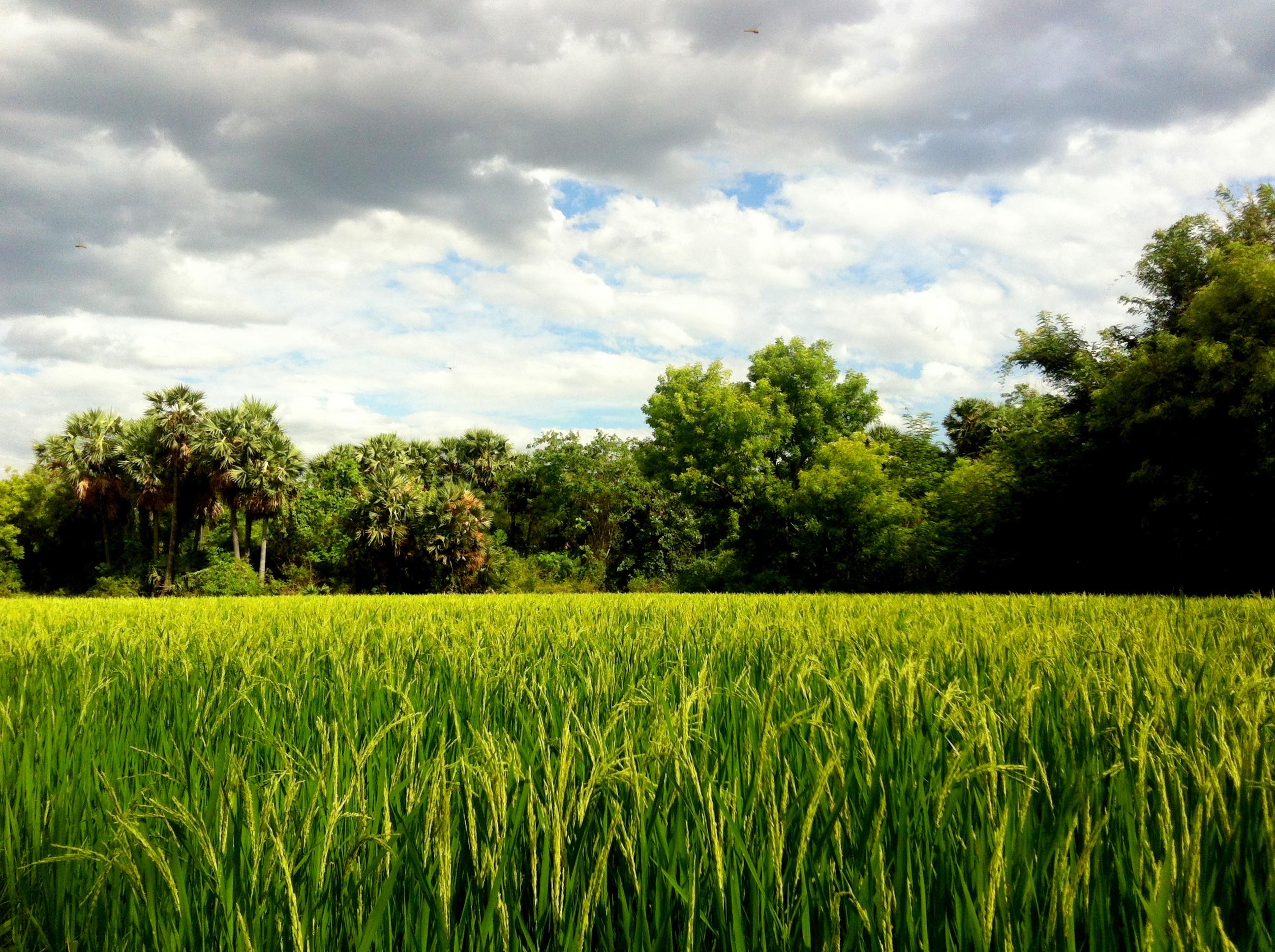 The 14th Finance Commission skewed the distribution of additional monies towards states with demographic might. Representative image of a Tamil Nadu paddy field. Credit: Wikimedia Commons

The government in 2015 accepted the 14th Finance Commission’s (FFC) recommendations. At the time, Prime Minister Narendra Modi hailed it as a push towards greater federalism. Most commentators agreed.

After all, the FFC increased states’ share of central taxes, the divisible pool, from close to 32% to 42%. This ten-percentage-point increase in devolution of funds to states does seem like a good thing, even though the central government pushed a lot of existing spending from its books to those of states. But more importantly, the question is: how is this additional ten-percentage-point increase getting divided among the states?

The Finance Commission’s possibly most important output is that it comes up with the formula that decides how much each state gets out of this divisible pool. The FFC changed the formula quite significantly – it has skewed the distribution of additional monies towards states with demographic might. This makes a state like Tamil Nadu lose out spectacularly. Consider the change in allocation ratio from the 13th Finance Commission (TFC) to the FFC.

As the chart shows, Tamil Nadu has had the most significant negative impact from changing the weights of factors by which the divisible pool is distributed among states. As a state with a high base, this -19.04% change in the weight of allocation, combined with the loss of other state-specific grants, translates into a loss of about Rs 6,000 crore for the state. To understand the magnitude of this number, this would be sufficient for the state to waive all farm loans – an ongoing demand that has seen serious protests.

The Finance Commission arrives at its formula by assigning weights to factors it believes should determine this allocation. To any one who manages to take a look at these factors, they appear awfully simplistic and regressive in the sense of stated policy objectives. The table below lists the differences in weights between the 13th and 14th Finance Commissions that has caused such a deviation in allocation ratios.

Decreasing the weightage for population in the 1971 Census and increasing the weightage for population in the 2011 Census has automatically rewarded states with a high fertility rate in the past 40 years. Worse, by extension, it has punished states that have managed to achieve low fertility rates, which is a known correlate with high female literacy. The other significant factor is the addition of a new weight called forest cover, amounting to 7.5%. It’s unlikely that states are going to manufacture forests overnight – so states that are largely urbanised and have had historically low forest cover are again punished. An erstwhile weight in the TFC, at a significant 17.5%, for fiscal discipline has been eliminated. Income distance, calculated using per-capita GSDP, gets a weightage of 50%. By using a per capita measure, this again rewards states that have a large population as they end up with lower per capita income as recent experience has shown.

A useful way to look at the FFC outcomes is to plot the change in share due to revised formula against the increased share of divisible pool. This gives an estimate of how much a given state has gained or lost out in relative terms. This plot, shown below, reveals Tamil Nadu is an outlier in terms of loss of funds in extreme proportions. No other state seems to come close in terms of relative loss; the new FFC formula has inflicted quite a blow to Tamil Nadu. 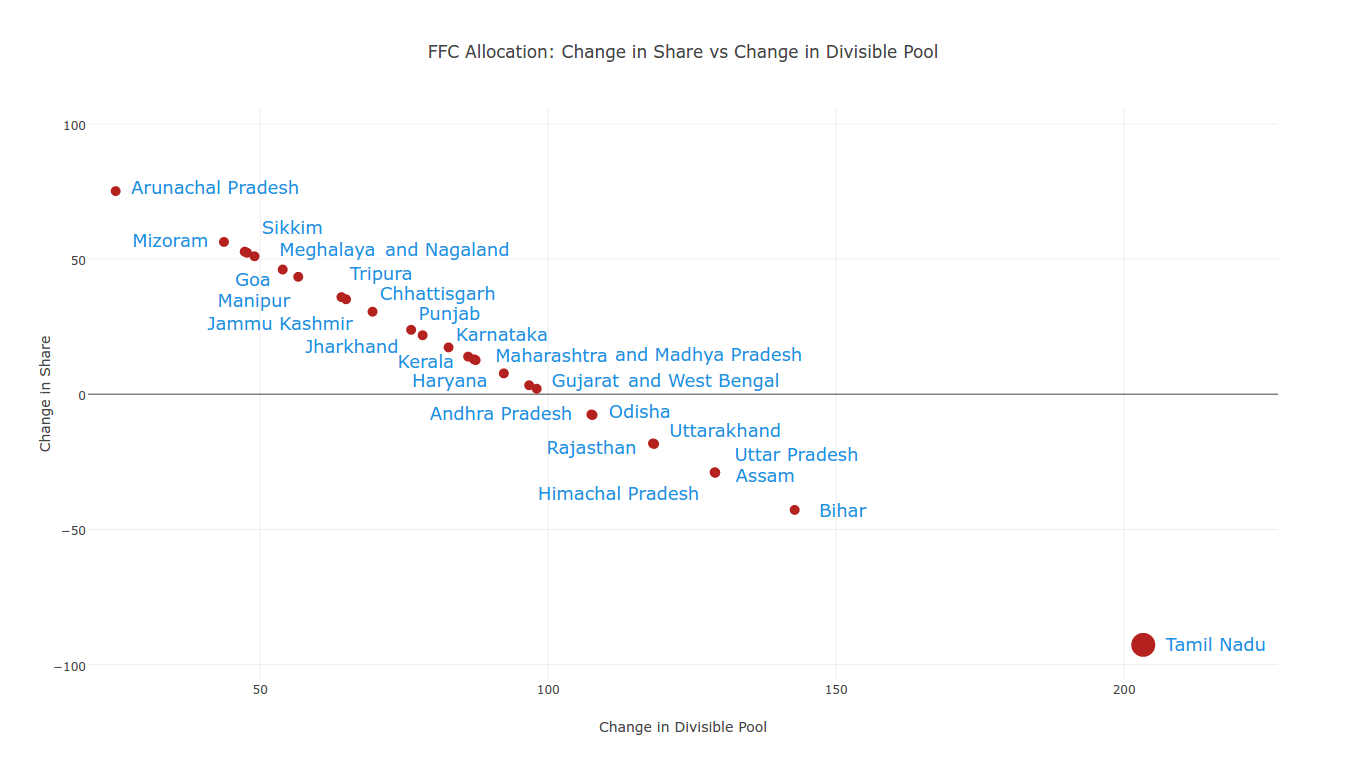 Two other ways that one can look at the outcomes of the FFC formula is how the additional transfers stack up against each state’s own tax revenue and Net State Domestic Product. As one would expect, the other relatively wealthy states of Haryana, Maharashtra and Gujarat have very little gains as a proportion of their wealth as well.

However, unlike Tamil Nadu, their fertility rates haven’t been below replacement rates for over a generation. Which is why the change in share measured against the increase in divisible pool isn’t as bad for these states as it is for Tamil Nadu.

Taxation can and must be progressive at the individual level. There’s political rationale for that in a democracy. But in a large federal country like India, does that apply to states when each state in itself is large enough to be a mid-sized developing country? Worse, those states have significant numbers of poor people within that state? And is it fair that the parameters of such progressive transfers ultimately reward poor female literacy? After all, female illiteracy is the one global correlate for high fertility rate.

What the FFC formula looks like to someone looking at it from Tamil Nadu is: India rewards the brute demographic advantage of north India over a state’s performance. That is what is worrying, more than the actual transfer. The formula can be tweaked at a later stage, but the intent of India in asserting demographic skew is a democratic instinct that’s hard to reverse. And the most badly affected in this trend is going to be states like Tamil Nadu and Kerala.

If India decides to press ahead with this strategy, the next logical step is looking at the frozen delimitation of Lok Sabha seats. Tamil Nadu, which accrued the maximum advantage in political representation over the past 40 years due to low fertility rates, is at the risk of surrendering that hard-won edge. The state with the next highest representation advantage is Kerala. And again, the states would be victims of their own success if that happens; surely, India’s message to its states isn’t one to make more babies by not educating women.

The streets of Tamil Nadu are already overflowing with real and imagined grievances against the Indian state. The recent Jallikattu protests stand testimony to that. The central government unfortunately seems to be pressing ahead with making the real ones more real and imaginary ones less imaginary.