A new research project that examines the impact of surveillance on women offers wider answers about the relationship between data, power and autonomy.

As Aadhaar cards go from creeping to barging into our lives, questions about the pros and cons of surveillance are becoming increasingly important to consider. We’re told this is about the nation’s development and modernity and that we shouldn’t worry if we have nothing to hide. Besides that, it is becoming increasingly difficult to imagine a life without Facebook, Google, Uber and the millions of other apps that offer us services in exchange for all the information they can possibly glean from us.

Two researchers think one of the ways we can understand the dangers of surveillance is by gendering our analysis of it. For instance, women – who are subjected to constant scrutiny – are often told that they’re not allowed to venture out for their safety, but you don’t have to be particularly imaginative to realise that such actions are also motivated by wanting to control women’s actions.

Nayantara Ranganathan, one of the researchers, told The Wire about what prompted the project, “The surveillant gaze of patriarchy is super relatable. So using that to bring into focus surveillance by all other kinds of actors also, and in other kinds of power structures was exciting”.

In her introduction on the Gendering Surveillance website, Anja Kovacs, the other half of the pair, cites Twitter trolling as a great example of women being harassed for publicly indulging in ‘deviant’ behaviour – which can be something as simple as a comment that questions the state’s actions or a picture that doesn’t fit a certain moral ideal. It can happen to men too – take the recent case of a professor being arrested for his comments on a Whatsapp group.

Kovacs and Ranganathan have put together three case studies of starkly different situations to bring to light the different ways in which surveillance is used to control women.

In the past few years, it’s become common practice for khap panchayats to ban young unmarried women (and sometimes even married ones) from using mobile phones. As Naresh Tikait, Sisouli village sarpanch explained to Kovacs, mobile phones lead to women talking to strangers, which results in them marrying men that were not selected by their parents and all of this results in a loss of honour for the girl’s family – something that must be avoided at all costs. So, the solution is to limit girls’ access to phones, if not entirely, then only under supervised conditions to prevent ‘misuse’.

Responding to the negative media attention that honour killings have received in the last few years, Tikait told Kovacs, “We don’t want to kill girls like it is portrayed in the papers. We love our girls. But arranged marriages run longer. Otherwise you have to go to the DM [District Magistrate], jilli mukhya [District Head] – the girls’ family gets upset, the boys’ family gets upset. We don’t feel good.”

On the face of it, this argument is not very different from the strain of illogical arguments that say women should not wear jeans or go out alone lest they invite ‘trouble’. But, as Kovacs points out, phones are different because they enable more autonomy by creating a private space for women – where they can choose who to interact with, how they want to conduct themselves and construct identities for themselves that go beyond the constantly monitored traditional roles they’re restricted to in their homes. All of which young men are simply entitled to.

Despite some village leaders insisting that the rules are meant for men too, the women that Kovacs spoke to knew all too well that nobody was concerned about men’s mobile phone usage.

An eleventh grader from Shahpur told the researcher, “when boys use it [i.e. a mobile phone], parents say, “do whatever you want, just leave us out of it”. For girls, the house’s whole izzat depends on it.”

As Kovacs knows, at the end of the day this surveillance is not about protecting families’ izzat and societal constructs, not girls themselves.

Who do safety apps really cater to?

In their second case study, Kovacs and Ranganathan took on the disheartening task of figuring out if the “startling” number of safety apps that offer speedy calls to emergency contacts, GPS tracking, panic buttons and all that good stuff actually work.

Testing 50 apps, Ranganathan discovered that “most apps are aimed at making public spaces safer, and are designed to do so by reducing the time taken to contact someone in a dangerous situation”. So far so good. Except that less than 6% of registered rapes are stranger rapes, according to the National Crime Records Bureau, as the two authors point out. So how effectively are these apps addressing women’s safety concerns?

Ranganathan thinks not very much. Referring to the “self-congratulatory fervour” of such apps’ makers, she wrote, “Apps that make it easy to contact the police or a family member in a short time are of no use when cases of sexual assault by a known person can involve wilful ignorance by family members, reluctance of police to meddle in ‘family matters’, blackmail and any number of other complications”. 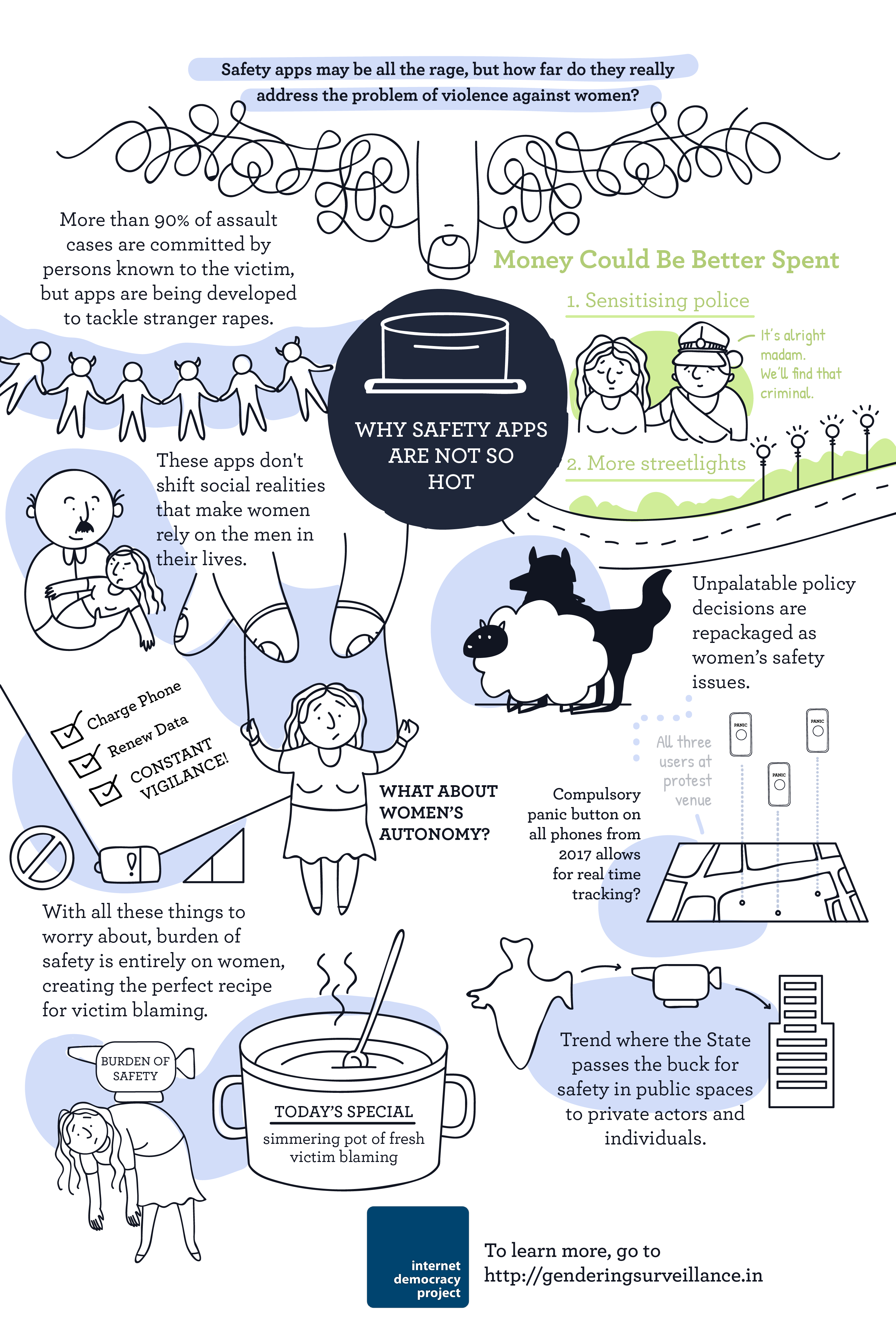 An infographic explaining why safety apps are not effective in tackling violence against women. Credit: Tanvee Nabar/Gendering Surveillance

Private app developers are not alone in their flawed priorities. Starting January 1, 2017, the telecom ministry mandated that all phones have ‘panic buttons’. The thought, obviously, is that this will enable a woman in a threatening situation to contact someone – family, friends,  the police – who will get to her in time to help her. But Ranganathan is concerned about the fact that the ministry has not announced which agency will be responding to these alerts. Additionally, the lack of information about privacy policies or knowledge of whether the panic buttons will allow phones’ GPS to be activated remotely raises even more alarming privacy concerns. Should anyone have access to such accurate data about our movements? And has the government taken any steps to protect that information? Doesn’t look like it.

In fact, as Ranganathan points out, apps like Reliance’s Spottr just assume that women ought to rely on male members of their family to protect them – the idea of self-reliance seems to be have been written off at the product design stage itself. So then, these safety apps that ought to enable more autonomy for women essentially become a tool for others to keep tabs on their movements, disallowing them from doing things or going places that their families, friends, society at large may disapprove of.

Reliance’s Spottr is not marketed as a women’s safety app, but consider its messaging encouraging surveillance of women in the family. Credit: Screenshot from website

If a woman is assaulted on a dark road late at night, these apps are not very capable of preventing that from happening – Ranganathan and Kovacs’ research shows that alerts on Facebook feeds, to people’s phones and police stations often prove unreliable – but will effectively enable victim-shaming narratives like ‘why was she out so late at night in the first place?’

In fact, they raise a potentially more troubling aspect of such apps – most don’t have privacy policies, and those that do are not very transparent about how they store your data and who they sell it to. 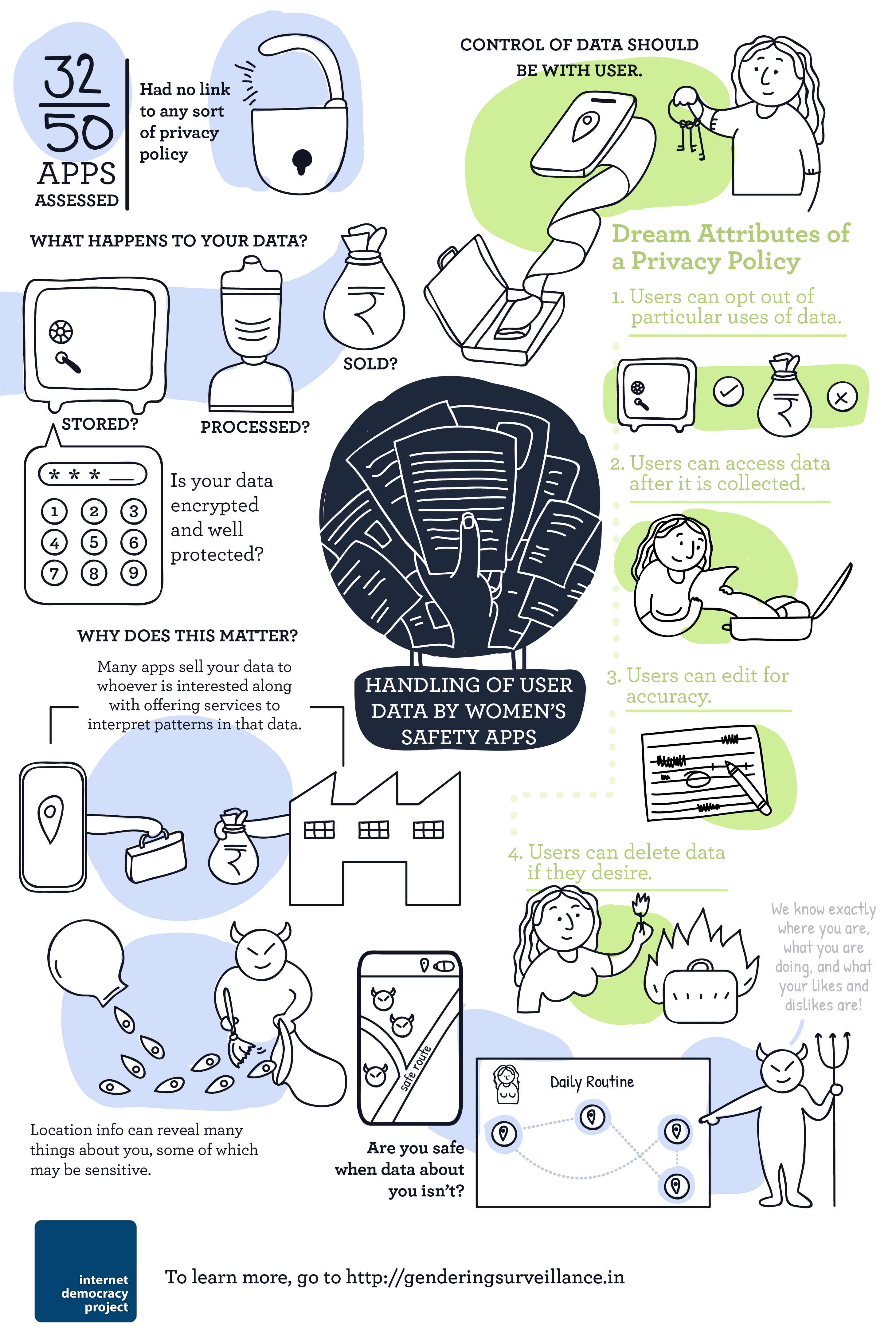 Are you “safe” when data about you is not safe? Credit: Tanvee Nabar/Gendering Surveillance

Technology is not neutral

In their third case, Kovacs and Ranganathan examined the world of CCTV cameras in garment factories – an industry in which 80% of employees tend to be women. Here, the constant presence of cameras was enabled the factory workers’ supervisors to ensure that they maximised their production time by minimising down time like chatter and laughter. In one case, a worker was moved to a seat in clearer view of a ‘CC camera’ as the women refer to them to enforce more discipline on her.

However, the women also felt monitored or watched in other ways such as the awkwardness of adjusting a sari blouse or scratching an itch when you know it’s being recorded and watched by a superior.

In some other cases, knowledge of the cameras (which are increasingly becoming the government’s chosen tool for ensuring safety in cities) was misused by male superiors to sexually harass workers. One such case involved a man who would call certain workers to the factory early, before the cameras switched on for the day in order to exploit them with impunity.

What’s implicit in such scenarios is that the researchers do a good job of making explicit with their work is that knowledge of the cameras belongs only to those doing the surveillance – the supervisors – and leaves the workers themselves in the dark. This gives one group a lot of power over the other. Obviously, the cameras could easily be used to monitor and check the potential misuse of power as well but that would require factory workers to have access to the same information – which seems unlikely at this point.

As Kovacs writes, “Power relations need to be examined to assess the value to any technology. Some slums in Delhi and Mumbai (Jha 2013) have installed CCTV cameras with the intention to expose false arrests and persecution by the police of the slum dwellers during episodes of communal violence. Similarly, surveillance cameras might very well prove to be useful for garments factory workers to hold supervisors and the management accountable for certain kinds of actions, if only they get access to the data.”

It’s this relationship between access to data and power that most concerns the critics of Aadhaar. As Kovacs explained over email, since we don’t know who and what agencies have access to our personal information, any leakage can be especially harmful to those who are already marginalised and vulnerable.

She says,”For example, as was recently reported in the media, the Ministry of Women and Child Development has now made Aadhaar a prerequisite to avail of schemes aimed at the rescue and rehabilitation of victims of sexual trafficking. All too often, these women continue to be stigmatised in their communities once they have returned. Now they will also be stamped as victims of sexual trafficking for life in databases that might be shared with people who really have no need to know about this. Where those people are bureaucrats, this might severely affect women’s ability to negotiate with them, even to get what is due to them as a citizen of India… In other words, databases are about power, and with the growing number of databases that are linked to Aadhaar while being managed in completely opaque ways, that power is only marginalising people who are already vulnerable more and more.”