Revisiting the Super-Bright Supernova 1987A After 30 Years

It was so bright that it was visible to the naked eye from Earth's surface, emitting the power of a 100 million Suns. 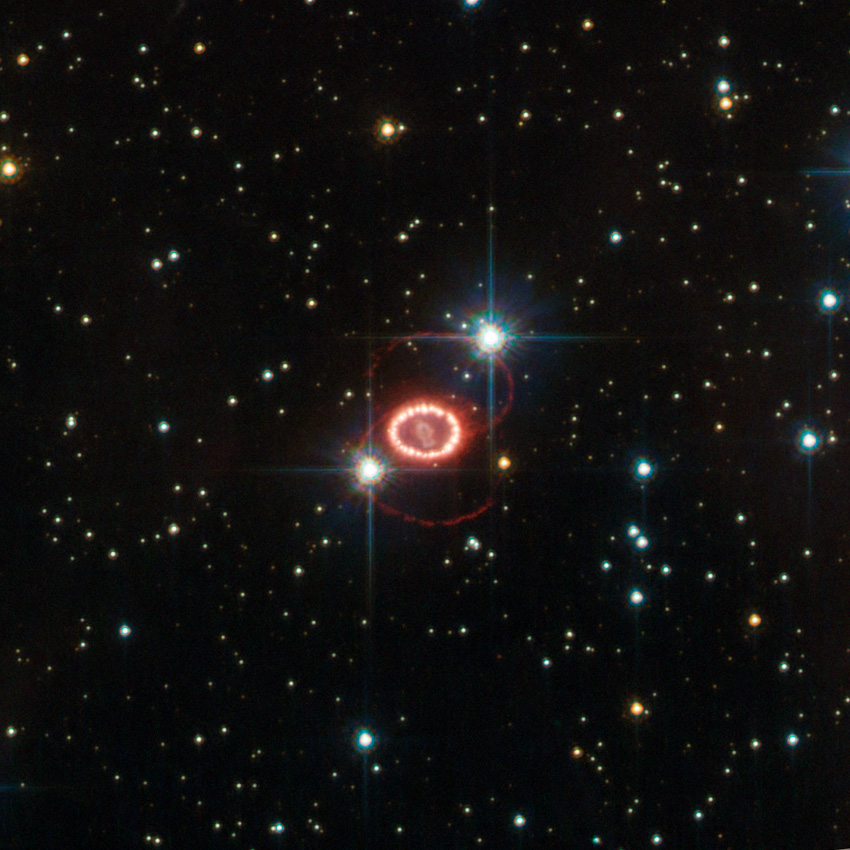 On February 23, 1987, the brightest supernova in almost four centuries years was observed in the Large Magellanic Cloud, a small galaxy on the outskirts of the Milky Way. It was so bright that it was visible to the naked eye from Earth’s surface, emitting the power of a 100 million Suns.

Because it is barely 168,000 lightyears away – a relatively small distance for supernovae – the explosion has been one of the most studied of its kind, alongside the iconic Supernova 1604 observed by Johannes Kepler. Its official designation is SN 1987A because it was the first supernova observed in 1987. Astronomers have gleaned multiple insights into the workings of stars from its demise, which continues to evolve to this day.

One of the more visible features of SN 1987A is a dust ring surrounding the disintegrating star. Observers think the ring was there until at least 20,000 years before the star blew up. It began to glow when radiation and charged particles from the explosion rammed into and energised its atoms. By September 2015, telescope readings revealed that the glow had started to fade in some parts of the ring, meaning the shockwave had moved past it.

Its impact is visible in the before-after comparison below.

Shortly after the observation, SN 1987A was found to have been the death of a star called Sanduleak -69º 202, a blue supergiant. When a star that is 10-100-times the Sun’s mass at the time of its birth runs out of hydrogen to fuse in its core, it begins to fuse heavier elements. As a result, the core temperature increases while the entire star expands to cool itself down. Its surface temperature reaches 10,000-50,000 K (the Sun’s is around 6,000 K). All together, the star becomes a large blue ball called a blue supergiant.

Further evidence of SN 1987A being a supernova emerged when detectors on Earth registered an uptick in the number of neutrinos. These particles are emitted when protons and electrons in the collapsing core of a supernova combine under intense pressure to form neutrons. This is why the event is also said to have birthed neutrino astronomy, the study of astronomical phenomena using neutrinos.

However, astronomers are yet to find the ultra-dense marble of neutrons, called a neutron star, itself because they haven’t been able to peer into the dense cloud of dust still surrounding SN 1987A.

When astronomers first realised that it was Sanduleak -69º 202 that had blown up, they were surprised because they didn’t think blue supergiants could go supernova. This is one of the mysteries surrounding the star. Subsequent observations also showed that the star had shrunk from being a larger red supergiant to a blue supergiant shortly before the explosion. And it was during its red supergiant phase that Sanduleak -69º 202 is thought to have emitted the dust ring.

Another mystery showed up during a closer inspection of the ring. It possesses an irregular arrangement of material, indicating it was puffed out by the star in fits and starts and not in the form of a smooth wind.

Observations since 1987, especially by the Hubble space telescope since 1990, have revealed more insights. For one, the ring is rich in nitrogen. For another, it is moving away from the star at a relatively slow rate of 110,000-160,000 km/hr. As of the 2016 image (above) captured by Hubble, the ring is about one lightyear across – more than a 1,000-times the average distance between Sun and Pluto.

And then, a third surprise: Hubble images of SN 1987A revealed the presence of two more ring-shaped circles of dust nearby. They hovered about 1.3 lightyears above and below the supernova. Together with the one encircling the star, they form the so-called Triple Ring Nebula. Their arrangement fits no known models of supernova explosions. Where could they have come from?

Some astronomers have found that all these questions can be answered if the star that went boom in 1987 was in fact a combination of two stars that united 20,000 years earlier. A study published in 2007 provided some details: Two stars weighing five- and fifteen-times as much as our Sun were orbiting each other, once every 10 years. Over time, the smaller star began to siphon off material from the larger star’s surface once the latter had run out of both hydrogen and helium to fuse in its core.

The larger star started becoming more voluminous because it was expanding to cool down – and had swallowed the smaller star within itself. Because both stars had been in orbit around each other, the merging star was rapidly rotating and their common envelope wasn’t yet stable. At some point, the energy still being released by the smaller core as it spiralled in towards the larger one caused the envelope to expel some material.

Finally, after all this, the smaller and larger cores fused to form a red supergiant star that then shrank into a blue supergiant over a few thousand years. The winds of gas and radiation emitted in this phase sculpted the material expelled earlier into the Triple Ring Nebula.

However, this isn’t to say we know what exactly was going on to this day.

For example, between 2012 and 2014, astronomers used the Nuclear Spectroscopic Array, a space telescope, to study SN 1987A to get a better idea of how it exploded. They were using the telescope to track down the titanium-44 isotope, formed during a supernova in the layer of material right above the star’s core. Scientists have a precise understanding of how it decays, and finding these decay signatures in the supernova remnant will indicate the directions in which the layer above the core – and the core itself – broke up. The astronomers found that all of the titanium-44 in the debris was moving towards Earth, suggesting that the core underwent an “asymmetric explosion” for some reason.

Understanding these processes – like trying to explain the universe using a combination of simpler, distinct concepts – is important because stars are the engines of the universe. When they live, they fuse lighter atoms to form heavier elements. They release mass and energy that whips up and energises their surroundings. When they die, they release all that they have produced back into the universe. Earth has the necessary ingredients for life because it swept up some of the remnants of dead stars that contained these ingredients.

A dying star is more directly useful in other ways as well. For example, by measuring the brightness of SN 1987A, and then using telescopes to estimate the diameter of the encircling ring, astronomers have been able to get a stronger fix on the distance from Earth to the Large Magellanic Cloud. This is an important achievement because these numbers allow scientists to better calibrate the brightness of other stars in the universe and then use that to measure the rate at which the universe is expanding.

More recently, a supernova called SN 2013fs was spotted 166 million lightyears away barely six hours after it exploded. That it had been caught in its act so quickly excited astronomers. The timescale for detections until then had been in the order of a few weeks. Now they had a supernova on their hands that they could watch as it played out, from beginning to end. And one of the discoverers’ surprise discoveries was that the progenitor star had been surrounded by a thin shell of gas.

Though the scientists have some ideas about its origins, that it was there at all disrupted astronomers’ theoretical models of supernovae just the way SN 1987A has and continues to do.