A day after Umar Khalid and Shehla Rashid were not allowed to speak at Ramjas college, clashes between protesting students from opposing sides continued. 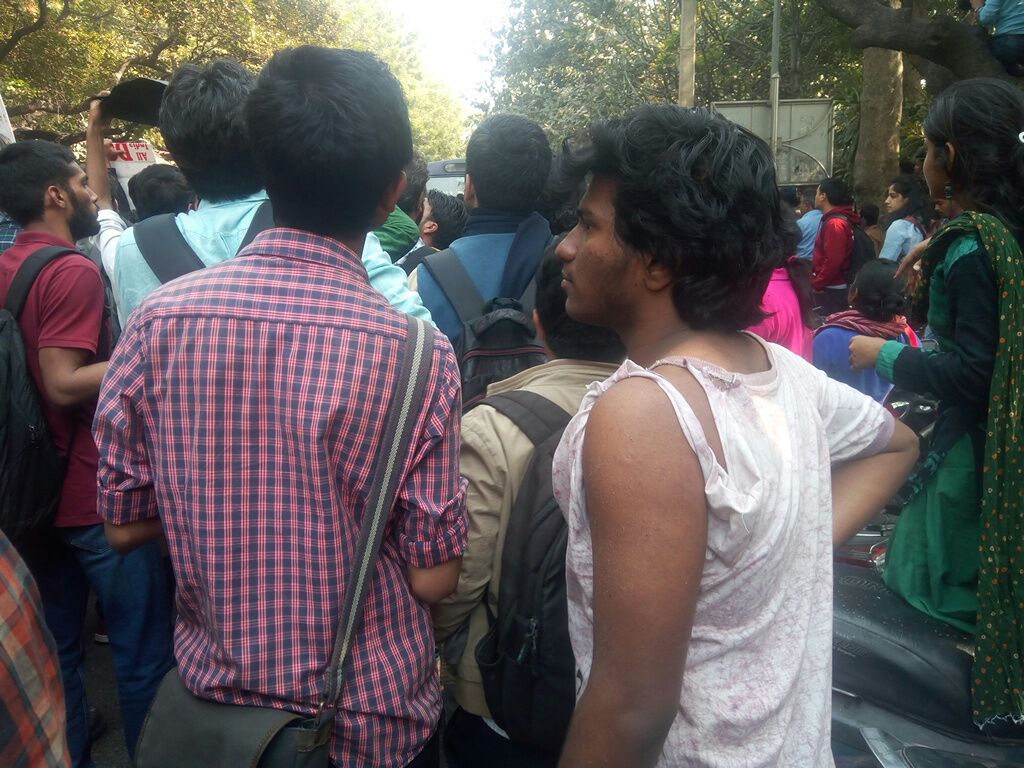 New Delhi: Continuing its campaign to keep Delhi University’s campus free of ‘anti-national’ elements, the Akhil Bharatiya Vidyarthi Parishad  on Wednesday clashed with students protesting the violent manner in which the RSS-linked organisation had disrupted a  programme at Ramjas college the previois day. The All India Students’ Association (AISA) and  Students’ Federation of India (SFI) had organised a march from Ramjas college to Maurice Nagar police station to protest  the cancellation of a seminar in which JNU’s Umar Khalid was supposed to speak. The Hindustan Times reported that at least a 100 police personnel in riot gear were brought in while the Hindu reported that the police resorted to lathi-charging to control the situation.

A senior police official told the Indian Express that about 50 people were detained to make sure that the situation did not escalate. The detainees will be released soon, he said.

As dozens of thugs wielding lathis laid siege inside the college, students and teachers who were participating in the march to uphold the freedom of expression on campus were caught in the fray. According to an NDTV report, at least 20 people were injured, and some journalists were also caught in the clashes. While the ABVP denied attacking the students and teachers, Shehla Rashid, who was also invited to Ramjas for the seminar, has been quoted by NDTV as saying, “We were attacked, the cops did nothing. Our students were bleeding. They hurled bricks at us…They pulled the hair of women,”

AISA’s Kawalpreet Kaur also said, “ABVP was beating us despite police being present. Many girls complained that they were touched inappropriately,”

On its part, the ABVP defended the strident position it took with DUSU president Satinder Awana telling the Hindustan Times, “We cannot allow anti-nationals to speak on the campus. Only ordinary students are protesting against anti-nationals.”  Abhishek Verma, another ABVP activist, told NDTV, “There was no violence. The ABVP always promotes discussion. But you need to maintain decorum…The college students and teachers didn’t want Umar Khalid,”

Abha Dev, a professor at Miranda House college, told the Indian Express that at least three teachers were injured in the clashes – Prasanta Chakraborty, Suvrita and Mousumi Bose. The injured were taken to the Hindu Rao hospital.

Chakraborty told the Hindustan Times, “I was beaten up by 15 people, possibly ABVP members… I was at the site, in solidarity with the protesting students,”

The trouble began on February 21 as ABVP activists protested against Khalid and Rashid’s visit to Ramjas for a seminar titled ‘Cultures of Protest’. Both Khalid, who had been arrested on sedition charges in 2016, and Rashid who had led the JNU student’s movement against the arrests and sedition charges, had been invited to speak.

According to a PTI report, the ABVP  locked  the seminar room and  pelted stones to protest  the presence of so-called ‘anti-nationals’. As a consequence of the agitation, the college authorities  withdrew Khalid and Rashid’s invitations. This sparked a protest that  led to clashes on Tuesday.

According to a PTI report the police have said that cases would be filed on the basis of the complaints of the SHO of Maurice Nagar police station and not AISA backed students or the teachers from Delhi University Teachers Association.

Anger has been growing on social media, as the issue gets increasingly polarised. Live videos, like the one posted below, are being shared on Facebook to show the extent of violence.

The Wire received a text message from protesting students who intend to gather at the Maurice Nagar police station and organise a sit-in on February 22.

Amnesty International’s executive director in India, Aakar Patel, released a press statement that cautioned against the growing intolerance in university campuses. Patel wrote, “Universities are supposed to be safe spaces for debate and discussion. But the events at Ramjas College are a shameful reminder of how intimidation and threats continue to restrict free speech on university campuses,”