Gas shortages have sent prices soaring nationwide, undermining a sweeping campaign to switch millions of households and thousands of businesses from coal to natural gas in north China this winter. 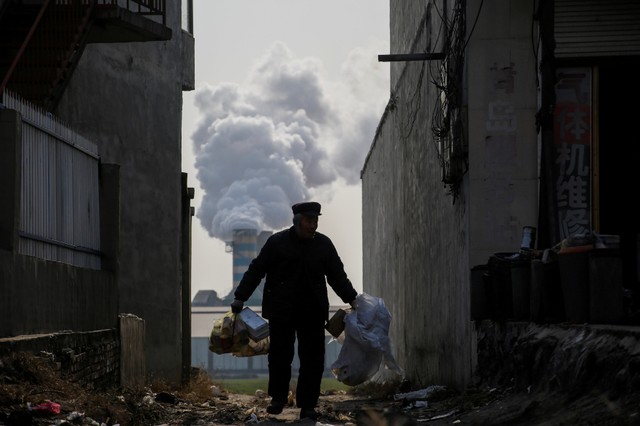 A man collects recyclablesr from an alley as smoke billows from the chimney of a factory in rural Gaoyi county, known for its ceramics production, near Shijiazhuang, Hebei province, China, December 7, 2017. Credit: Reuters/Thomas Peter 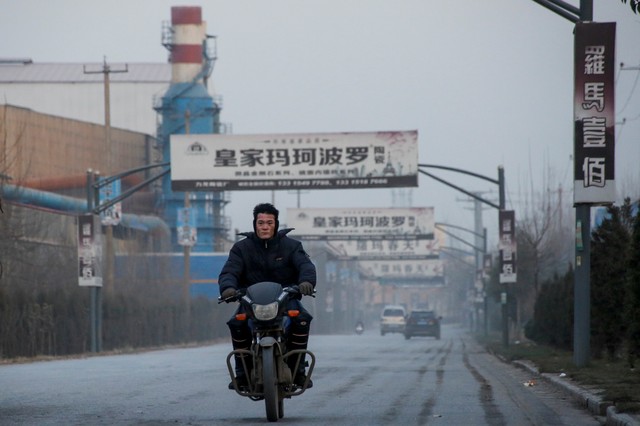 Shijiazhuang, China: Severe natural gas shortages are hitting businesses and residents across China’s industrial heartland as an unprecedented government effort to clean up an environment devastated by decades of unbridled growth backfires.

Factories are closing or operating at reduced capacity, businesses are seeing profits shrink as supply chains are disrupted, and people are shivering through sub-zero temperatures without adequate heating at home, according to interviews conducted across the region last week.

The gas shortages, which have sent prices soaring nationwide, have undermined a sweeping campaign to switch millions of households and thousands of businesses from coal to natural gas in north China this winter, part of long-running efforts to clean the region’s toxic air.

Much of the gasification of the region, involving over 4 million homes, was rapidly launched by local authorities acting on their own initiatives in response to calls by the central government to control air pollution.

But the plan appears to have been overly ambitious.

Despite the installation of gas lines and boilers for factories and homes across the northeast, supply has been hampered by the insufficient infrastructure to bring the fuel to the industrial region and store it, according to Liang Jin, an independent analyst previously with the oil and gas consultancy JLC.

And in some areas, many homes have yet to get the gas boilers needed for heating.

The gas plan was also implemented as China tries this winter to reduce production from polluting industries like steel and cut back on the use of diesel trucks. That has raised concerns about whether the anti-pollution campaigns may hit economic growth.

Interviews with business owners, families, utilities and gas producers in Hebei province highlighted the problem and suggested that many cities were unprepared to cope. Hebei is adjacent to Beijing and its factories are often blamed for much of the pollution that often cloaks the capital in the winter.

Xue Huabing, who owns a small floor-tile factory in rural Hebei, said compliance with the new environmental standards means he has only been able to operate for four months this year.

Production at his factory near Shijiazhuang, Hebei’s capital, has been disrupted several times by environmental inspections and halted over the summer to install new natural gas boilers, he said.

After moving from coal to natural gas and reopening in September, the factory halted production again in October as gas prices soared.

“The price of gas is 6-7 yuan per cubic meter, up from 2 yuan last year,” Xue told Reuters by phone. “If we open, we are going to run at a loss.” He added that it was also difficult for him to secure gas supplies.

Domestic liquefied natural gas prices have jumped more than 70% since mid-November, hitting record highs above 8,000 yuan per tonne this month, according to market.yeslng.com, an online exchange for domestic gas supplies.

Reduced industrial activity from the earlier effort to curb smokestack factories is also hitting suppliers of raw materials, according to businesses.

The gas shortages are also now being felt in southern China, where local governments are sounding the alarm, and some companies are closing down or slowing production.

“I think there already has been an impact from the campaign on growth,” said Julian Evans-Pritchard, an economist at Capital Economics in Singapore, referring to the anti-pollution drive. “We saw quite a sharp slowdown in October data.”

At Zheng Wenmin’s shop selling kitchen fixtures in Shijiazhuang, a city of 10 million and Hebei’s capital, business is down more than 20% this year. Disruptions to housing construction, which has slowed amid the crackdown on pollution, mean fewer people are decorating new homes, she said.

“The prices we pay our suppliers are much higher, and the supply is unstable because factories are shut down or have to cut production,” Zheng said.

Central government officials have said the pollution crackdown will not have an adverse impact on the economy, but some economists disagree.

China could lose nearly half a percentage point of gross domestic product growth this winter if it sticks to its pollution-reduction targets, Capital Economics has estimated.

“I wouldn’t be surprised if they start getting worried” about slowing growth soon, said Evans-Pritchard.

Signs of a slowdown are already being seen. Shijiazhuang’s economy expanded 7.1% in the first nine months of the year, slowing from 7.8% over the same period last year, city government data showed.

Heavy industrial output contracted 2.4% year-on-year in the first ten months of the year, which compared with 4.5% growth in 2016.

The Shijiazhuang city government, Hebei provincial government, and the Ministry of Environmental Protection did not respond to requests for comment. The Hebei Development and Reform Commission declined to comment. 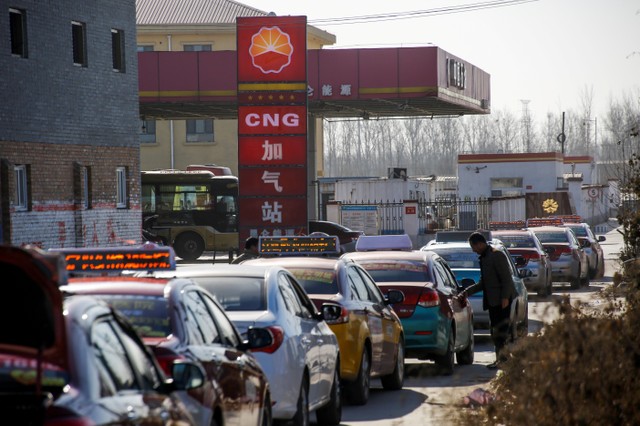 Cars line up at a filling station for liquid natural gas (LNG), one of a few that is open for business, in Baoding, Hebei province, China, December 5, 2017. Credit: Reuters/Thomas Peter

Most of China’s gas is produced offshore and in the far west of the country. Getting enough gas to the industrial northeast to meet surging demand is a major challenge due to a shortage of pipelines, as well as facilities that would allow the storage of fuel in the summer for use in winter.

To address the shortages the government is speeding up the construction of a pipeline bringing gas from Russia, according to state media reports.

“I don’t think the government can fix the problem within the next three to five years,” said Liang, the gas analyst. “For this year, the Hebei government is facing a supply shortage of 2 billion cubic meters.”

The most visible example of the ongoing gas shortage is at filling stations, where taxis running on liquid natural gas spend hours queuing.

Wang Chao, a taxi driver in the city of Baoding, a two-hour drive southwest of Beijing, said he waited at least three hours a day to get gas.

When considering the higher price for gas and hours of work lost, Wang estimates he earns at least 1,000 yuan less each month.

The Baoding government did not respond to a request for comment.

In Gaoyi county, part of Shijiazhuang, where residents said 80% of ceramics factories were currently closed, even the large plants still operating aren’t immune to the shortages.

The owner of one of the largest factories in town had to cut production by 50% in early December as Shijiazhuang declared a gas crisis. The owner asked that neither he nor his company be named.

“It is very difficult to keep jobs for our employees this winter,” said the owner of the company, which has about 500 million yuan in annual sales and several hundred employees. 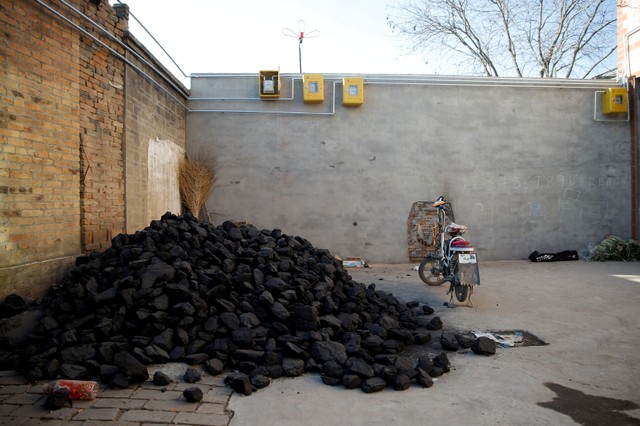 A pile of coal is seen underneath newly installed gas pipes in a courtyard in the village of Heqiaoxiang outside of Baoding, Hebei province, China, December 5, 2017. Credit: Reuters/Thomas Peter

Residents in Hebei are also bracing for a colder winter, with temperatures forecast to plunge deeper below zero.

In a dusty village on the outskirts of Baoding, Zhang Xu, 31, said her two young sons were getting sick more often this winter from sleeping in their cold bedroom.

“My older son is always asking me why it is so cold in the house, and all I can do is put them in sweaters,” Zhang said.

New bright yellow gas pipelines installed by the local government snake conspicuously through Zhang’s village. But in most homes, like Zhang’s, the government has not yet installed gas boilers and some residents said they had been secretly burning coal left from last winter to keep themselves warm.

Facing the reality that many people in the northeast did not have gas heating, the Ministry of Environmental Protection recently reversed course and said residents could temporarily burn coal.

Despite the upheaval, most residents and businesses interviewed said they believed something had to be done about pollution, but took issue with how measures were being implemented.

“The skies are blue, but it’s the common people that have to pay the price,” said Zheng, the shop owner.